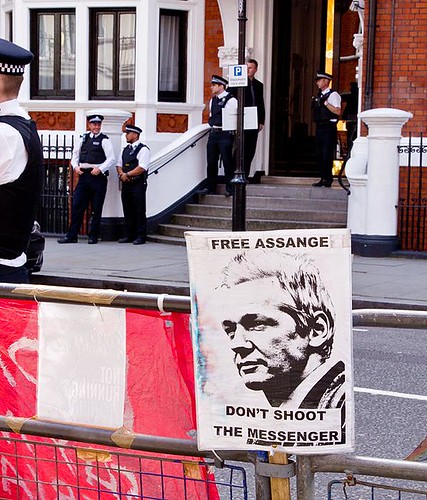 After being kept holed up in the Ecuadorian embassy in London for over three years, WikiLeaks founder Julian Assange announced that he will accept his fate and will allow the UK police to arrest him if the UN panel investigating his case rules against him.

http://democracynow.org – The BBC reports the United Nations panel investigating the case of WikiLeaks founder Julian Assange has ruled he has been “arbitrarily detained.” The U.N. says it will not confirm the report until Friday at 11 a.m. Geneva time. Assange first complained to the U.N. in 2014 that he was being arbitrarily detained since he could not leave the Ecuadorean Embassy in London without being arrested. Assange took refuge in the embassy in 2012. Assange wants to avoid extradition to Sweden over sex assault claims, which he has repeatedly denied. He says he fears Sweden will extradite him to the United States, where he could face trial for publishing classified information. Police say a warrant for Assange’s arrest remains in place. Assange has called for his arrest warrant to be dropped if the panel ruled in his favor. The BBC reports the panel’s ruling will not have any formal influence over the British and Swedish authorities. We go to London to speak with one of Assange’s lawyers, Jennifer Robinson, who says, “We hope and expect that the U.K. and Sweden will act accordingly.”

The lengthy stay in the embassy has taken its toll on Assange’s health.

Several months ago, Wikileaks said that he was in constant pain and that the UK government had refused him permission to visit a hospital.

Earlier it was reported that he had developed a potentially fatal heart condition, with a number of other health problems….

RT talked to Bruno Kramm from the German Pirate Party.

Britain says it rejects a UN panel ruling that WikiLeaks founder Julian Assange is the victim of arbitrary detention at the Ecuadorian embassy in London and insists he will still be extradited to Sweden if arrested in the UK.

http://democracynow.org – A United Nations panel has officially concluded WikiLeaks founder Julian Assange has been “arbitrarily detained” and should be allowed to walk free. Assange has been holed up in the Ecuadorean Embassy in London for more than three years. He wants to avoid extradition to Sweden over sex crimes allegations, which he has repeatedly denied and for which he has never been charged. He fears Sweden would extradite him to the United States, where he could face trial for WikiLeaks’ revelations. We air reaction to the U.N. decision from Assange and his attorney, Melinda Taylor, and speak with Mads Andenæs, U.N. special rapporteur on arbitrary detention.

21 thoughts on “Will Julian Assange of WikiLeaks Go Free After U.N. Finds He Is Being Arbitrarily Detained?”