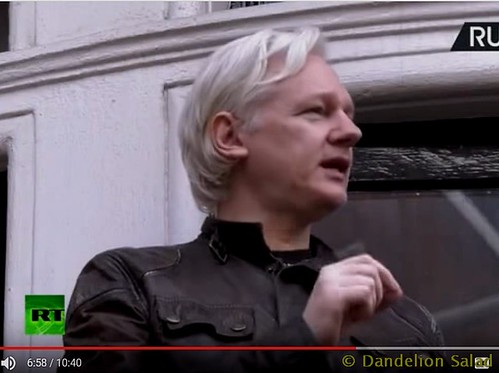 ‘Sweden acted as vassal state to US’ in Assange case – journalist

WikiLeaks founder Julian Assange has been cleared of all rape charges out of the Swedish government. He gave a speech from the balcony of the Ecuadoran embassy, expressing bitterness at the time lost. Afshin Rattansi, host of “Going Underground” who has reported extensively on Assange and the controversies orbiting him, join RT America’s Manila Chan to offer his insights and discuss Assange’s ongoing legal challenges despite the dropped rape charge.

Swedish prosecutors said as “all options of moving the investigation forward are now exhausted” and “in light of the views expressed by the [Swedish] Supreme Court on the proportionality of remanding someone in absentia” it was no longer “proportional” to maintain Assange’s arrest warrant.

https://democracynow.org – Swedish prosecutors have dropped an investigation into allegations of sexual misconduct by WikiLeaks founder Julian Assange. Assange has denied the allegations, which he calls a pretext for his ultimate extradition to the U.S. to face prosecution under the Espionage Act. Since 2012, Assange has taken refuge in the Ecuadorean Embassy in London. It’s not clear whether Assange will emerge any time soon. “This is a small victory, but in this long road to free Julian Assange and all the people working for WikiLeaks,” says our guest Renata Avila, a Courage Foundation trustee and human rights lawyer. “But it will finally help us lawyers to focus on the main issue, which is the persecution, the political persecution, and imminent prosecution of Julian Assange in the United States.”

“I will not forgive or forget” – Assange speaks

6 thoughts on “Swedish Prosecutors Drop Case On Julian Assange + Assange: I Will Not Forgive Or Forget”