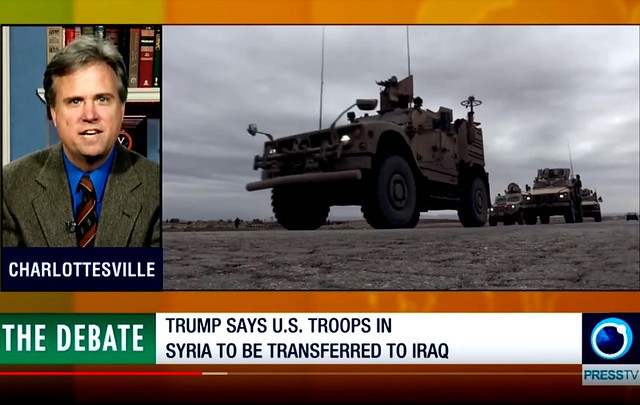 The U.S. President Donald Trump has defended his decision to withdraw troops from Syria, claiming that the U.S.-led coalition succeeded in taking nearly all territories held by Daesh terrorists. Trump, however; added that the troops would be shifted to Iraq and the U.S. would maintain its military presence there to watch Iran.

US President Donald Trump again this week portrayed his plan to pull troops out of Syria as a “victory homecoming” and “an end to endless wars”. Then, in stepped Secretary of State Mike Pompeo to clarify what’s really going on: it’s a “tactical change” to put Iran in the crosshairs.

The purported pullout is not a return of US military from the Middle East, as Trump has been trumpeting with self-congratulations. It’s more a reconfiguration of American military power in the strategically vital region, and in particular for greater aggressive leverage on Iran.

In his State of the Union speech to Congress this week, Trump talked about giving a “warm welcome home to our brave warriors” from Syria. Supposedly it was “mission accomplished” for the US in defeating the ISIS terror group in that country.

It should be pointed out that ISIS would not have been in Syria or Iraq if it were not for criminal American military interventions, covert and overt, in those countries.

In any case, Trump was proclaiming America “victorious”, and so it was time, he said, to follow up on his order given in December for the 2,000 or so troops (illegally present) in Syria to withdraw.

The day after his nationwide address, Trump reiterated the theme of glorious homecoming at a forum of the Global Coalition to Defeat ISIS, held in Washington DC. This was a two-day gathering of dozens of US allies who have been attacking Syrian territory in the name of fighting terrorists (terrorists that many of these same coalition members, such as Saudi Arabia and Turkey, have been covertly sponsoring.)

“We look forward to giving our warriors a warm welcome home,” Trump again told delegates after informing them that the ISIS caliphate had been virtually destroyed by US forces and partners.

His top diplomat Mike Pompeo, however, assured the gathering that the US was still “leading the fight against terror” and that the planned troop withdrawal from Syria was only a “tactical maneuver”. He said that what Washington wanted was for more regional partners to take over military operations from the US.

When Trump first made the announcement of a troop withdrawal from Syria on December 19, there was immediate pushback from military figures in the Pentagon and politicians in Washington. Together with a proposed drawdown of US forces in Afghanistan by Trump, it was construed that the president was signaling a wholesale retreat from the region.

Since the “surprise” announcement by Trump, lawmakers within his Republican party have been doubling down to prevent any pullout from Syria or Afghanistan. This week, the US Senate voted through legislation to block any abrupt withdrawal, claiming that, contrary to Trump’s assertions, ISIS has not been defeated and still poses a national security threat.

The Pentagon has also been warning of a “resurgence” of ISIS in Syria and Iraq if US forces were to pull out. A Department of Defense document published this week quoted Pompeo. “Following the president’s announcement in December 2018 to withdraw troops from Syria, Secretary of State Mike Pompeo stated that the policy objectives of defeating ISIS and deterring Iran had not changed.”

In other words, the Pentagon is busily rationalizing for entrenchment in the region, not for a retreat.

Last month, while on a nine-nation tour of the Middle East, Pompeo was at pains to emphasize to America’s Arab client regimes that Trump’s pullout from Syria was a reorganization of military forces, not an overall withdrawal. During his tour, Pompeo renewed Washington’s project to create an “Arab NATO” for the region, with the top priority being to contain Iran. According to Radio Free Europe, he said, “the United States is redoubling efforts to put pressure on Iran.”

Next week, the US has organized a conference to be held in Poland which is dedicated to intensifying international pressure on Iran. The indications are that senior European Union officials will not attend the summit as it is stoking tensions with Tehran at a time when the EU is striving to save the nuclear accord with Iran.

However, the conference in Poland testifies to ramped up efforts by Washington to isolate Iran internationally and provoke instability in the country for regime change. Since Trump walked away from the internationally-backed nuclear accord last year, his administration has been piling on the aggressive rhetoric towards Iran, in particular from his national security advisor John Bolton, as well as Pompeo.

This obsession to confront Iran would explain the real significance of Trump’s supposed pullout plans in Syria and Afghanistan. Both countries have been utter failures for US imperialism. They are a dead loss, despite the self-congratulatory nonsense spouted by Trump.

What the White House is intent on doing, it seems, is redirecting its military forces in the region away from dead-end causes for a more aggressive stance towards Iran. Pompeo’s “clarifications” about Trump’s troop withdrawal makes it clear that what is going on is not a scaling down of American military power in the region, but a reconfiguration.

Trump himself has indicated that too. In a recent interview with the CBS channel, Trump said that US forces would be reassigned from Syria to Iraq where the Pentagon has several large military bases. He explicitly said that the US forces in Iraq would be used to “keep a watch on Iran” and the wider region.

Trump’s braggadocio immediately got him into hot water with the Iraqis. Iraqi President Barham Salih fulminated that the 5,000 or so US troops in his country were there strictly for the purpose of combating terrorism, not for “watching Iran” or any other neighboring country. Other Iraqi lawmakers have been so incensed by Trump’s comments that they are calling for the presence of US forces to be terminated.

Thus, the apprehensions among the bipartisan War Party in Washington and some at the Pentagon regarding Trump’s purported troop pullout from Syria and Afghanistan are misplaced. Trump is not “ending the endless wars” that feed American imperialism and its war-machine economy.

Far from it. The Condo King is simply moving the Pentagon’s real estate around the region in order to get a better view of the planned aggression towards Iran.

David Swanson: An Actual Break with American Exceptionalism is not on the Agenda of Trump or his Advisors

Chris Hedges: Many Unintended Consequences of the US Backing Out of the Iran Nuclear Deal + Global Impact of US Withdrawal + Israel Hits Iran in Syria