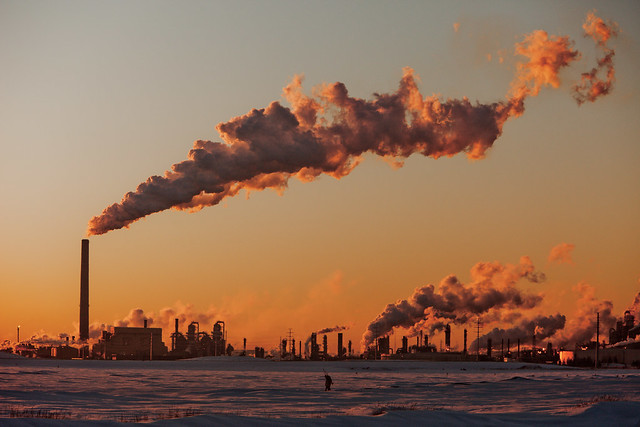 How can anyone sleep at night? My first nightmare about environmental crisis occurred in 1990. I was eight years old. In it, acid rain poured from the sky, scalding the skin of humans and stripping holes in the leaves of trees. On either side of a long, ashen-gray street, billowing plumes of smog chugged out of smokestacks. I was running, searching for sanctuary from the toxic waste. Nowhere was safe.

It’s 2022. I’m turning 40 this summer and my bad dreams are nothing compared to reality. The climate crisis is crashing down in cascades of disasters – forest fires, torrential floods, crop failures, ferocious hurricanes, heat domes … the stuff of nightmares.

And while I wrestle with existential dread and horrified insomnia, our political leaders are asleep at the wheel. They’re dreaming of midterm elections, business-as-usual, yet another war, and hoping to pass the buck on dealing with the non-negotiable need for a swift transition away from fossil fuels.

We’re running out of time.

When I was a teenager, the epic movie Titanic rolled through the movie theaters. Leonardo DiCaprio starred as a doomed, but handsome lower-class artist named Jack who fell in love with an upper-class woman played by Kate Winslet. The ship hit the iceberg. The band played on. The poor drowned in droves. The rich tossed children out of lifeboats to secure their own safety. It was the epic symbol of our times, a powerful metaphorical augury.

It would take DiCaprio 22 years to find a more apropos image. In Don’t Look Up, he stars as a freaked-out scientist warning of an inevitable collision with a massive, extinction-causing asteroid. In this film, he doesn’t survive either.

The poem goes on to ask: what did you do, once you knew?

Some of us can’t sleep. We know it’s the eleventh hour. We know we’re 100 seconds to midnight on the Doomsday Clock. We know the ecological debts racked up by our parents and grandparents are coming due. We know the future is increasingly uncertain with every minute, every second spent spewing out more fossil fuels into the atmosphere.

We can’t sleep … and we need to use our insomnia to wake up those who are dozing in denial. In the halls of power and corporate boardrooms, on Wall Street and on governing boards, we need them to gasp awake and jerk us out of this devastating collision course with proverbial icebergs that are melting and collapsing in skyscraper-sized chunks.

Author/Actress Rivera Sun syndicated by PeaceVoice, is the author of The Dandelion Insurrection and the sequels, The Roots of Resistance, Winds of Change, and Rise and Resist – Essays on Love, Courage, Politics and Resistance and other books. She is the editor of Nonviolence News and a nationwide trainer in strategy for nonviolent campaigns. Website: https://www.riverasun.com.

Drew Dellinger: It’s 3:23 in the Morning

3 thoughts on “Sleepwalking Into Climate Nightmares, by Rivera Sun”