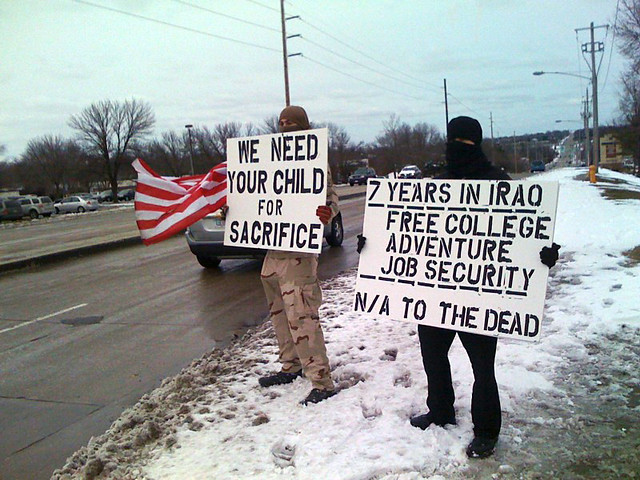 In the drizzling rain, I yank up the military recruitment sign and throw it into the tall grasses on the side of the road. If anyone asks, I didn’t “destroy” government property. I merely relocated it. Think of me like a windstorm. A peace-loving, nonviolent windstorm countering military recruitment.

Who knows how many lives I saved with this simple action? Perhaps it saved the teens that were considering enlisting as they rode the school bus past these signs twice a day. Perhaps it will help some innocent civilians overseas who so often bear the brunt of our nation’s addiction to war. Maybe it will slow down the profiteering warmongering of military industrial complex to realize they can’t count on enlistment rates.

The military recruitment sign was one of two shoved into the sides of the main road in my rural community. The road runs straight through the middle of all six towns in our valley. Every person in our area drives down this road to fetch groceries, visit the doctor, or pick up library books. Every school child in my town goes past these military recruitment signs on their way to public school. Twice a day, coming and going, high school students see the black and yellow lettering.

The yard signs promise careers and adventure. They promise students “free” money for college education and an “opportunity to see the world.”

Pushing back against war culture can be as simple as yanking these yard signs up and throwing them out of sight in the woods. I also flip over the recruitment posters on the peg boards at the grocery store. If I’m really on a peace-ranging rampage, I’ll downgrade the product placement value of the toy guns and GI Joe action figures at the toy store, concealing them behind the skateboards and puzzles.

Every day, in countless ways, the war culture is seducing our kids with their violent superheroes, militarized sci-fi movies, horrifically brutal video games, glossy recruitment ads, and military salutes at sports games. When was the last time you saw tribute to peace activists at the football match?

Reining in the unchallenged dominance of the war culture makes a difference. This year, the U.S. military fell short of its recruitment goals. That means there’s 15,000 young people who weren’t duped into risking their lives fighting people in foreign countries for dubious purposes. If removing the military’s yard signs from our main street keeps even one kid out of the death and destruction of war, it’s worth it. See you out there.

Rivera Sun syndicated by PeaceVoice, is the author of The Dandelion Insurrection and the sequels, The Roots of Resistance, Winds of Change, and Rise and Resist – Essays on Love, Courage, Politics and Resistance and other books, including a study guide to making change with nonviolent action. She is the editor of Nonviolence News and a nationwide trainer in strategy for nonviolent campaigns. Website: https://www.riverasun.com.

Supporters of Peace on Earth Should Support Free College in the United States, by David Swanson

4 thoughts on “Culture-Jamming the War Machine, by Rivera Sun”