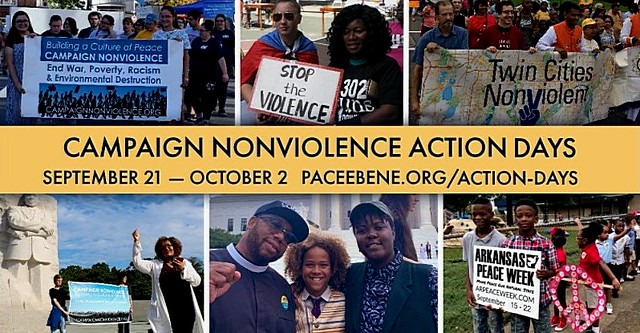 We have a violence problem. It runs through our nation like an invisible road system, touching every front door, cutting through each town and city. Mass shootings kill our children in their schools. Forty-five thousand people will take their own lives this year. An additional 14,000 are likely to be killed by gun violence. Twelve million of our fellow citizens will experience intimate partner violence this year. More than ten million children face violence in the forms of maltreatment, verbal abuse, sexual assault, extreme neglect, and physical abuse.

And all this will continue, year after year … unless we take our violence problem seriously.

In 2014, an effort named Campaign Nonviolence launched to ‘build a culture of peace and active nonviolence, free from war, poverty, racism, and environmental destruction’. Each year, they hold an annual week of actions, bringing together the many efforts to address violence. In all 50 states and dozens of countries, more than 4,000 actions and events will take place between September 21st, the International Day of Peace, and October 2nd, the International Day of Nonviolence.

Tens of thousands of people will be organizing teach-ins, rallies, marches, protests, mural painting events, sermons on peace, trainings in nonviolence, violence prevention teams, overpass bannering, leafleting, vigils, street theater, and so much more. With hundreds of participating groups, the Campaign Nonviolence Action Days has become an annual reminder that the systems and structures that are currently churning out violence and injustice can be replaced with viable and realistic alternatives anchored in nonviolence.

Campaign Nonviolence defines violence as more than just physical. It can take the forms of cultural violence, systemic and structural violence, emotional and psychological violence, institutional violence and more. Conversely, the campaign also recognizes that a culture of nonviolence is constructed of structural/systemic nonviolent solutions — things like living wages, affordable housing, restorative justice, trauma healing, renewable energy, racial justice, and so on.

Dr. Martin Luther King, Jr. and Dr. Bernard Lafayette put forward the idea of institutionalizing nonviolence in our schools, businesses, public offices, cultural beliefs and attitudes, and more. It’s a compelling notion to imagine that the output of our society could be healing, respectful, affirming, generous, fair, and compassionate. Social change has always come from those courageous enough to imagine it. Suffrage, worker rights, schooling for every child, social support for our elders, access for people with disabilities — all of these came about because of the vision, courage, and perseverance of people who longed for a different world.

Violence may be everywhere, but so are we. Tens of thousands of people will move into action between Sept. 21-Oct. 2 to bring a nonviolent world one step closer to reality. Will you?

Author Rivera Sun syndicated by PeaceVoice, is the author of The Dandelion Insurrection and the sequels, The Roots of Resistance, Winds of Change, and Rise and Resist – Essays on Love, Courage, Politics and Resistance and other books, including a study guide to making change with nonviolent action. She is the editor of Nonviolence News and a nationwide trainer in strategy for nonviolent campaigns. Website: https://www.riverasun.com.

Howard Zinn: You Can’t Be Neutral On A Moving Train

9 thoughts on “We Have A Violence Problem — Campaign Nonviolence Strives To Solve It, by Rivera Sun”