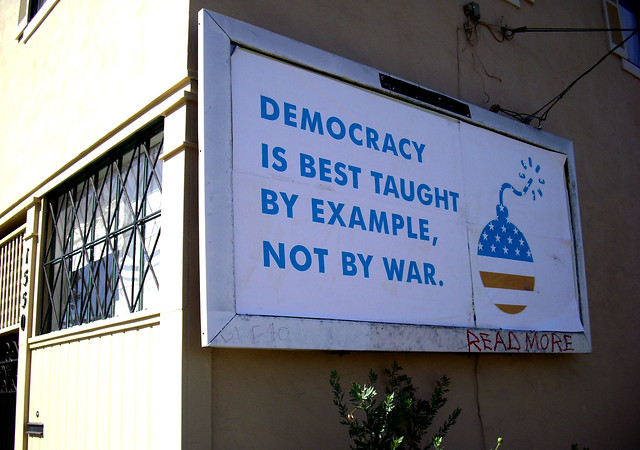 On the show, Chris Hedges discusses with foreign correspondent Patrick Cockburn the war, news and chaos in the Middle East.

END_OF_DOCUMENT_TOKEN_TO_BE_REPLACED 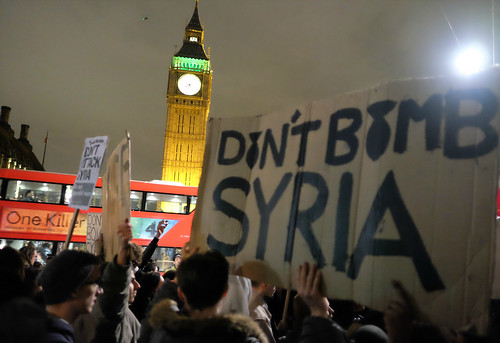 To withdraw, or not to withdraw? That is the question Donald Trump, in his own inimitable way, has answered both ways.

END_OF_DOCUMENT_TOKEN_TO_BE_REPLACED 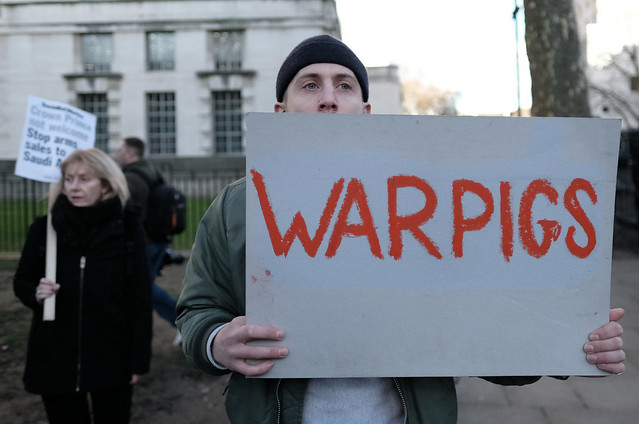 END_OF_DOCUMENT_TOKEN_TO_BE_REPLACED

What a disastrous past week it’s been for Saudi Arabia’s international public relations. It’s hard to imagine how it could possibly become more ignominious or cringe making for the House of Saud.

END_OF_DOCUMENT_TOKEN_TO_BE_REPLACED 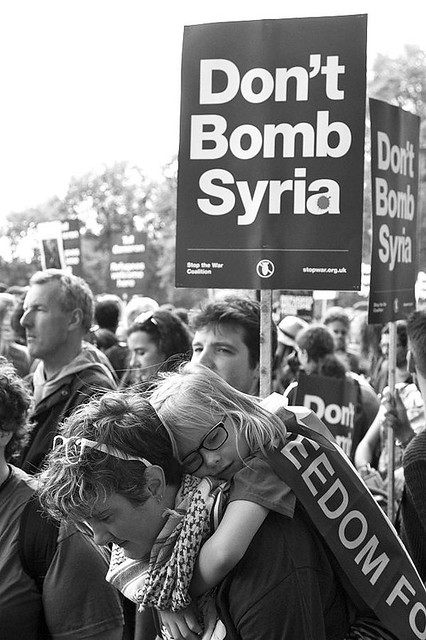 END_OF_DOCUMENT_TOKEN_TO_BE_REPLACED

As Israel buried Ariel Sharon amid eulogies from world figures, Tony Blair, a Butcher of Baghdad, paid a tribute to the Butcher of Beirut which included the line that Sharon: “didn’t think of peace as a dreamer, but did dream of peace.” Also that: “ … he sought peace with the same iron determination” as he had fought (read slaughtered, across the Middle East.) Re-writing history does not come more blatant, but Blair was ever good at fantasy, think “weapons of mass destruction” and “forty five minutes.”

END_OF_DOCUMENT_TOKEN_TO_BE_REPLACED

Saudi largesse is throwing money again – in a bid to cover up its bloodstained hands in violence hitting the Middle East and beyond.

The latest public relations gimmick is the “donation” of $3 billion to the Lebanese army made by Saudi King Abdullah at the weekend.

The Saudi cash – twice the national military budget of Lebanon – is being regaled in the Western media as a noble offer to secure Lebanon from recent terror attacks.

END_OF_DOCUMENT_TOKEN_TO_BE_REPLACED

Israel is set to become a major exporter of gas and some oil, if all goes to plan. The giant Leviathan natural gas field, in the eastern Mediterranean, discovered in December 2010, is widely described as “off the coast of Israel.”

At the time the gas field was:

“…the most prominent field ever found in the sub-explored area of the Levantine Basin, which covers about 83,000 square kilometres of the eastern Mediterranean region.” (i)

END_OF_DOCUMENT_TOKEN_TO_BE_REPLACED

As the Muslim holy month of Ramadan came to an end this year, Saudi King Abdullah marked the occasion of Eid al-Fitr with a “generous” donation.

The Saudi monarch revealed that the oil-rich kingdom was donating $100 million to the United Nations’ Center for Counter-Terrorism, based in New York.

END_OF_DOCUMENT_TOKEN_TO_BE_REPLACED

The killings of three Palestinian refugees this past week including Ahmad Qassim  from Nahr al Bared (‘cold river’) camp near Tripoli and 15 year old Khaled al-Youssef from Ein el Helwe (‘ the beautiful eye’)  30 miles south of Beirut in Saida, and the wounding of more than a dozen others by the Lebanese army were not, as some Lebanese  politicians are claiming, “accidental security incidents”.  They were avoidable negligent homicides as much so as Zionist occupation forces and settler/colonists in Palestine regularly commit.

END_OF_DOCUMENT_TOKEN_TO_BE_REPLACED

US media has confirmed finally that the CIA is helping armed gangs in Syria, operating out of Turkey with weapons smuggled through Turkey.

END_OF_DOCUMENT_TOKEN_TO_BE_REPLACED

In early spring 1983, shortly before her death, the American journalist Janet Lee Stevens urged this observer to visit Libya and meet some friends of hers who were active in the Palestine armed resistance.  In those days, thanks to Yasser Arafat’s skill, passion, charm and cash, there were ten Palestinian groups publicly associated, and another half dozen more shadowy ones, sometimes in and sometimes out, depending on shifting political considerations, of the then large tent of the Palestine Liberation Organization (PLO).

END_OF_DOCUMENT_TOKEN_TO_BE_REPLACED

Three or four gentlemen regularly sit outside a small grocery store, opposite this observer’s flat, drinking coffee and smoking argileh water pipes, in the Hezbollah neighborhood of Haret Hreik in south Beirut. I rely on them and value their insights  into the swirling events in Lebanon and credit their analyses and gut instincts about developments on the streets.

END_OF_DOCUMENT_TOKEN_TO_BE_REPLACED

It might require a semanticist with Noam Chomsky’s erudition to explain to some of  us more obtuse the meanings, context, and policy nuances of two similar and repeated phases heard  in Lebanon earlier this month by two well listened to guests . During over-lapping visits of top US and Iranian officials to Lebanon; one warned and threatened Lebanon, while the second praised Lebanon’s “achievements”.  Admittedly, divining these Lebanese ‘achievements” is no mean task.