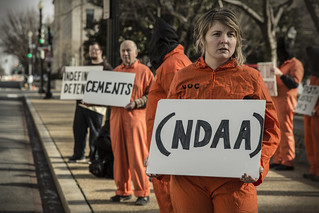 Act of Faith? Congressmen admit to not reading NDAA before voting

US House members admitted they had not read the entire $585 billion, 1,648-page National Defense Authorization Act, which predominantly specifies budgeting for the Defense Department, before it was voted on Thursday in Congress.

National Defense Related Provisions:
The Senate Amendment to H.R. 3979 authorizes and prioritizes funding for the Department of Defense (DoD) and other select national security programs within the Department of Energy for FY 2014. The bill authorizes a $520.5 billion topline for base national defense programs, which includes $7.1 billion in mandatory defense spending and $513.4 billion in discretionary spending. Additionally, the bill authorizes $63.7 billion for Overseas Contingency Operations (OCO).  The Senate Amendment to H.R. 3979 is consistent with the House budget, H.Con.Res. 96, which passed with 219 Republican votes on April 10, 2014.  The topline for national defense spending is $48 billion less than the enacted level in the FY 2015 NDAA.  The bill reflects the $22 billion in partial sequester relief that was enacted in the Ryan-Murray bipartisan budget agreement.

Congresswoman Tulsi Gabbard (HI-02) today voted against the House-Senate compromise for the National Defense Authorization Act of 2015 (NDAA), citing serious concerns about the inclusion of a provision to train and equip so-called moderate Syrian rebels for the next two years without debate.

Washington, DC – Congresswoman Tulsi Gabbard (HI-02) has joined a group of bipartisan colleagues to call attention to significant policy provisions that were inserted into the National Defense Authorization Act of 2015 (NDAA) without a vote or serious debate. The annual defense bill will come to the House floor for approval today, and includes a two-year extension of the authority to equip and train so-called moderate Syrian rebels.

“It is absolutely unacceptable to include an open-ended policy of arming and training so-called ‘moderate’ Syrian rebels in the NDAA without any serious public debate or a standalone vote,” said Congresswoman Tulsi Gabbard, a twice-deployed veteran who has repeatedly criticized the strategy to arm Syrian rebels. “Giving weapons and training to these rebels whose stated purpose is to overthrow President Assad will have lengthy and costly consequences because it continues the broken policy of overthrowing regimes and nation-building that has cost so many precious lives and our nation’s treasure, drawing us into another country’s civil war. I voted against this provision on September 17, when the Administration promised Congress would be able to reassess this strategy in December 2014. To the contrary, Congress has had no opportunity to discuss, debate, or vote on this standalone question. There is no reason to bury this issue in a major must-pass annual defense bill that includes critical provisions for our military’s readiness and our troops’ well-being. We must have a standalone vote so the American people’s voice can be heard.

“Congress cannot continue to offer tacit support for a strategy that does not support achieving our mission of destroying ISIL and the Islamic extremists who seek to harm us. By continuing to funnel weapons to rebels in Syria, whose vetting and loyalties are questionable and untested, we face the likely outcome of our weapons falling into the hands of our enemies yet again, to be used against Americans and innocent civilians.”

Full text of the bipartisan letter is available below: […]

Frankel Statement on Vote Against the Defense Bill

“While the NDAA has many important provisions that I support, I cannot in good conscience vote for this bill because of the failure of Congress to take up and debate the authority of the President to conduct a war in Iraq and Syria,” said Frankel. “It is a disgrace that we are sending our children into harms way and spending billions of dollars without having a debate about whether and to what extent we should be involved in this war.”

Every year, Congress must pass a defense bill, the NDAA, to fund all military-related activities. The 2015 NDAA allows $513.4 billion in funding for Department of Defense. Among its many parts, the NDAA gives President Obama the authority to expand U.S. military operations against the terrorist group ISIL in Iraq and Syria. It also provides continued funding to train and equip Syrian rebels, which would otherwise expire on December 11.

In September, Frankel voted against training these Syrian rebels because the legislation did not allow for a debate on the full scale and scope of U.S. involvement in Iraq and Syria. Congress still has not held that debate.

Since August, the U.S. has conducted more than 1,700 airstrikes in Iraq and Syria. The Administration is carrying out these activities under congressionally approved authority as a result of the attacks of September 11, 2001. The President has indicated that the campaign to combat ISIL will take years and has said there are situations that could require the deployment of U.S. ground forces. Frankel believes Congress has an obligation to debate a new authorization in the fight against ISIL in Iraq and Syria.

Congressmen admit to not reading NDAA before voting for it: ‘I trust the leadership’

http://votecruncher.com/rollcalls/house/113-congress/2014/december/4/roll-no-551 (Great statistics on who voted for and voted against)