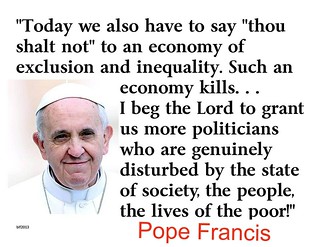 Pope Francis’ revolutionary encyclical addresses not just climate change but the banking crisis. Interestingly, the solution to that crisis may have been modeled in the Middle Ages by Franciscan monks following the Saint from whom the Pope took his name.

Pope Francis has been called “the revolutionary Pope.” Before he became Pope Francis, he was a Jesuit Cardinal in Argentina named Jorge Mario Bergoglio, the son of a rail worker. Moments after his election, he made history by taking on the name Francis, after Saint Francis of Assisi, the leader of a rival order known to have shunned wealth to live in poverty.

Pope Francis’ June 2015 encyclical is called “Praised Be,” a title based on an ancient song attributed to St. Francis. Most papal encyclicals are addressed only to Roman Catholics, but this one is addressed to the world. And while its main focus is considered to be climate change, its 184 pages cover much more than that. Among other sweeping reforms, it calls for a radical overhaul of the banking system. It states in Section IV:

Today, in view of the common good, there is urgent need for politics and economics to enter into a frank dialogue in the service of life, especially human life. Saving banks at any cost, making the public pay the price, forgoing a firm commitment to reviewing and reforming the entire system, only reaffirms the absolute power of a financial system, a power which has no future and will only give rise to new crises after a slow, costly and only apparent recovery. The financial crisis of 2007-08 provided an opportunity to develop a new economy, more attentive to ethical principles, and new ways of regulating speculative financial practices and virtual wealth. But the response to the crisis did not include rethinking the outdated criteria which continue to rule the world.

. . . A strategy for real change calls for rethinking processes in their entirety, for it is not enough to include a few superficial ecological considerations while failing to question the logic which underlies present-day culture.

“Rethinking the outdated criteria which continue to rule the world” is a call to revolution, one that is necessary if the planet and its people are to survive and thrive. Beyond a change in our thinking, we need a strategy for eliminating the financial parasite that is keeping us trapped in a prison of scarcity and debt.

Interestingly, the model for that strategy may have been created by the Order of the Saint from whom the Pope took his name. Medieval Franciscan monks, defying their conservative rival orders, evolved an alternative public banking model to serve the poor at a time when they were being exploited with exorbitant interest rates.

The Franciscan Alternative: Banking for the People

In the Middle Ages, the financial parasite draining the people of their assets and livelihoods was understood to be “usury” – charging rent for the use of money. Lending money at interest was forbidden to Christians, as a breach of the prohibition on usury proclaimed by Jesus in Luke 6:33. But there was a serious shortage of the precious metal coins that were the official medium of exchange, creating a need to expand the money supply with loans on credit.

An exception was therefore made to the proscription against usury for the Jews, whose Scriptures forbade usury only to “brothers” (meaning other Jews). This gave them a virtual monopoly on lending, however, allowing them to charge excessively high rates because there were no competitors. Interest sometimes went as high as 60 percent.

These rates were particularly devastating to the poor. To remedy the situation, Franciscan monks, defying the prohibitions of the Dominicans and Augustinians, formed charitable pawnshops called montes pietatus (pious or non-speculative collections of funds). These shops lent at low or no interest on the security of valuables left with the institution.

The first true mons pietatis made loans that were interest-free. Unfortunately, it went broke in the process. Expenses were to come out of the original capital investment; but that left no money to run the bank, and it eventually had to close.

Franciscan monks then established montes pietatis in Italy that lent at low rates of interest. They did not seek to make a profit on their loans. But they faced bitter opposition, not only from their banking competitors but from other theologians. It was not until 1515 that the montes were officially declared to be meritorious.

After that, they spread rapidly in Italy and other European countries. They soon evolved into banks, which were public in nature and served public and charitable purposes. This public bank tradition became the modern European tradition of public, cooperative and savings banks. It is particularly strong today in the municipal banks of Germany called Sparkassen.

The public banking concept at the heart of the Sparkassen was explored in the 18th century by the Irish philosopher Bishop George Berkeley, in a treatise called The Plan of a National Bank. Berkeley visited America and his work was studied by Benjamin Franklin, who popularized the public banking model in colonial Pennsylvania. In the US today, the model is exemplified in the state-owned Bank of North Dakota.

From “Usury” to “Financialization”

What was condemned as usury in the Middle Ages today goes by the more benign term “financialization” – turning public commodities and services into “asset classes” from which wealth can be siphoned by rich private investors. Far from being condemned, it is lauded as the way to fund development in an age in which money is scarce and governments and people everywhere are in debt.

Land and natural resources, once considered part of the commons, have long been privatized and financialized. More recently, this trend has been extended to pensions, health, education and housing. Today financialization has entered a third stage, in which it is invading infrastructure, water, and nature herself. Capital is no longer content merely to own. The goal today is to extract private profit at every stage of production and from every necessity of life.

The dire effects can be seen particularly in the financialization of food. The international food regime has developed over the centuries from colonial trading systems to state-directed development to transnational corporate control. Today the trading of food commodities by hedgers, arbitrageurs and index speculators has disconnected markets from the real-world demand for food. The result has been sudden shortages, price spikes and food riots. Financialization has turned farming from a small scale, autonomous and ecologically-sustainable craft to a corporate assembly process that relies on patented technologies and equipment increasingly financed through debt.

We have bought into this financialization scheme based on a faulty economic model, in which we have allowed money to be created privately by banks and lent to governments and people at interest. The vast majority of the circulating money supply is now created by private banks in this way, as the Bank of England recently acknowledged.

Meanwhile, we live on a planet that holds the promise of abundance for all. Mechanization and computerization have streamlined production to the point that, if the work week and corporate profits were divided equitably, we could be living lives of ease, with our basic needs fulfilled and plenty of leisure to pursue the interests we find rewarding. We could, like St. Francis, be living like the lilies of the field. The workers and materials are available to build the infrastructure we need, provide the education our children need, provide the care the sick and elderly need. Inventions are waiting in the wings that could clean up our toxic environment, save the oceans, recycle waste, and convert sun, wind and perhaps even zero-point energy into usable energy sources.

The holdup is in finding the funding for these inventions. Our politicians tell us “we don’t have the money.” Yet China and some other Asian countries are powering ahead with this sort of sustainable development. Where have they found the money?

The answer is that they simply issue it. What private banks do in Western countries, publicly-owned and -controlled banks do in many Asian countries. Their governments have taken control of the engines of credit – the banks – and operated them for the benefit of the public and their own economies.

What blocks Western economies from pursuing that course is a dubious economic theory called “monetarism.” It is based on the premise that “inflation is always and everywhere a monetary phenomenon,” and that the chief cause of inflation is money “created out of thin air” by governments. In the 1970s, the Basel Committee discouraged governments from issuing money themselves or borrowing from their own central banks which issued it. Instead they were to borrow from “the market,” which generally meant borrowing from private banks. Overlooked was the fact, recently acknowledged by the Bank of England, that the money borrowed from banks is also created out of thin air. The difference is that bank-created money originates as a debt and comes with a hefty private interest charge attached.

We can break free from this exploitative system by returning the power to create money to governments and the people they represent. The strategy for real change called for by Pope Francis can be furthered with government-issued money of the sort originated by the American colonists, augmented by a network of publicly-owned banks of the sort established by the Order of St. Francis in the Middle Ages.

Noam Chomsky: All Are Trapped By An Institutional Logic That Is Deeply Pathological And That Must Be Cured And Quickly If We Are Not To Put An End To The Human Race

Naomi Klein: This Changes Everything: Capitalism vs. The Climate (must-see)