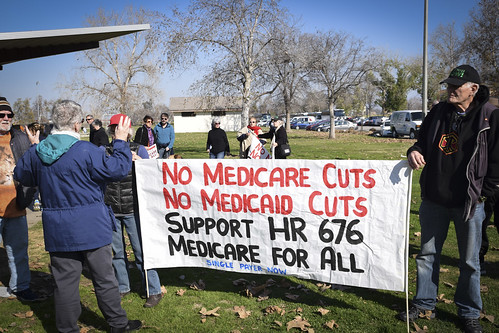 “The Canadian plan also helps Canadians live longer and healthier than Americans…. We need, as a nation, to reexamine the single-payer plan, as many individual states are doing.”

The new American Health Care Act has been unveiled, and critics are calling it more flawed even than the Obamacare it was meant to replace. Dubbed “Ryancare” or “Trumpcare” (over the objection of White House staff), the Republican health care bill is under attack from left and right, with even conservative leaders calling it “Obamacare Lite”, “bad policy”, a “warmed-over substitute,” and “dead on arrival.”

The problem for both administrations is that they have been trying to fund a bloated, inefficient, and overpriced medical system with scarce taxpayer funds, without capping its costs. US healthcare costs in 2016 averaged $10,345 per person, for a total of $3.35 trillion dollars, a full 18 percent of the entire economy, twice as much as in other industrialized countries.

Ross Perot, who ran for president in 1992, had the right idea: he said all we have to do is to look at other countries that have better health care at lower cost and copy them.

So which industrialized countries do it better than the US? The answer is, all of them. They all not only provide healthcare for the entire population at about half the cost, but they get better health outcomes than in the US. Their citizens have longer lifespans, fewer infant mortalities and less chronic disease.

President Trump, who is all about getting the most bang for the buck, should love that.

Hard to Argue with Success

The secret to the success of these more efficient systems is that they control medical costs. According to T. R. Reid in The Healing of America, they follow one of three models: the “Bismarck model” established in Germany, in which health providers and insurers are private but insurers are not allowed to make a profit; the “Beveridge model” adopted in Britain, where most healthcare providers work as government employees and the government acts as the single payer for all health services; and the Canadian model, a single-payer system in which the healthcare providers are mostly private.

A single government payer can negotiate much lower drug prices – about half what we pay in the US – and lower hospital prices. Single-payer is also much easier to administer. Cutting out the paperwork can save 30 percent on the cost of insurance. According to a May 2016 post by Physicians for a National Health Program:

“Per capita, the U.S. spends three times as much for health care as the U.K., whose taxpayer-funded National Health Service provides health care to citizens without additional charges or co-pays. In 2013, U.S. taxpayers footed the bill for 64.3 percent of U.S. health care — about $1.9 trillion. Yet in the U.S. nearly 30 million of our citizens still lack any form of insurance coverage.

Single payer, or Medicare for All, is the system proposed in 2016 by Democratic candidate Bernie Sanders. It is also the system endorsed by Donald Trump in his book The America We Deserve. Mr. Trump confirmed his admiration for that approach in January 2015, when he said on David Letterman:

“A friend of mine was in Scotland recently. He got very, very sick. They took him by ambulance and he was there for four days. He was really in trouble, and they released him and he said, ‘Where do I pay?’ And they said, ‘There’s no charge.’ Not only that, he said it was like great doctors, great care. I mean we could have a great system in this country.”

Contrary to the claims of its opponents, the single-payer plan of Bernie Sanders would not have been unaffordable. Rather, according to research by University of Massachusetts Amherst Professor Gerald Friedman, it would have generated substantial savings for the government:

“Under the single-payer system envisioned by “The Expanded & Improved Medicare For All Act” (H.R. 676), the U.S. could save $592 billion – $476 billion by eliminating administrative waste associated with the private insurance industry and $116 billion by reducing drug prices….”

The Problem Is Not Just the High Cost of Insurance

That is true in theory; but governments at all levels in the US already spend $1.6 trillion for healthcare, which goes mainly to Medicare and Medicaid and covers only 17 percent of the population. Where is the discrepancy?

For one thing, Medicare and Medicaid are more expensive than they need to be, because the US government has been prevented from negotiating drug and hospital costs. In January, a bill put forth by Sen. Sanders to allow the importation of cheaper prescription drugs from Canada was voted down. Sanders is now planning to introduce a bill to allow Medicare to negotiate drug prices, for which he is hoping for the support of the president. Trump indicated throughout his presidential campaign that he would support negotiating drug prices; and in January, he said that the pharmaceutical industry is “getting away with murder” because of what it charges the government. As observed by Ronnie Cummins, International Director of the Organic Consumers Association, in February 2017:

“… [B]ig pharmaceutical companies, for-profit hospitals and health insurers are allowed to jack up their profit margins at will. . . . Simply giving everyone access to Big Pharma’s overpriced drugs, and corporate hospitals’ profit-at-any-cost tests and treatment, will result in little more than soaring healthcare costs, with uninsured and insured alike remaining sick or becoming even sicker.”

Besides the unnecessarily high cost of drugs, the US medical system is prone to over-diagnosing and over-treating. The Congressional Budget Office says that up to 30 percent of the health care in the US is unnecessary. We use more medical technology than in other countries, including more expensive diagnostic equipment. The equipment must be used in order to recoup its costs. Unnecessary testing and treatment can create new health problems, requiring yet more treatment, further driving up medical bills.

Drug companies are driven by profit, and their market is sickness – a market they have little incentive to shrink. There is not much profit to be extracted from quick, effective cures. The money is in the drugs that have to be taken for 30 years, killing us slowly. And they are killing us. Pharmaceutical drugs taken as prescribed are the fourth leading cause of US deaths, after heart disease, cancer and stroke.

The US is the only industrialized country besides New Zealand that allows drug companies to advertise pharmaceuticals. Big Pharma spends more on lobbying than any other US industry, and it spends more than $5 billion a year on advertising. Lured by drug advertising, Americans are popping pills they don’t need, with side effects that are creating problems where none existed before. Americans compose only 5 percent of the world’s population, yet we consume fully 50 percent of Big Pharma’s drugs and 80 percent of the world’s pain pills. We not only take more drugs (measured in grams of active ingredient) than people in most other countries, but we have the highest use of new prescription drugs, which have a 1 in 5 chance of causing serious adverse reactions after they have been approved.

The US death toll from prescription drugs taken as prescribed is now 128,000 per year. As Jon Rappaport observes, with those results Big Pharma should be under criminal investigation. But the legal drug industry has grown too powerful for that. According to Dr. Marcia Angell, former editor in chief of the New England Journal of Medicine, writing in 2002:

“The combined profits for the ten drug companies in the Fortune 500 ($35.9 billion) were more than the profits for all the other 490 businesses put together ($33.7 billion). Over the past two decades the pharmaceutical industry has [become] a marketing machine to sell drugs of dubious benefit, [using] its wealth and power to co-opt every institution that might stand in its way, including the US Congress, the FDA, academic medical centers, and the medical profession itself.”

US healthcare costs are projected to grow at 6 percent a year over the next decade. The result could be to bankrupt not only millions of consumers but the entire federal government.

Obamacare has not worked, and Ryancare is not likely to work. As demonstrated in many other industrialized countries, single-payer delivers better health care at half the cost that Americans are paying now.

Winston Churchill is said to have quipped, “You can always count on the Americans to do the right thing after they have tried everything else.” We need to try a thrifty version of Medicare for all, with negotiated prices for drugs, hospitals and diagnostic equipment.

Healthcare or Wealthcare? 24 Million to Lose Insurance Under GOP Plan While Rich Get Big Tax Breaks

http://democracynow.org – A startling new report from the Congressional Budget Office is projecting 24 million people will lose health insurance coverage by 2026 under the Republican plan to replace the Affordable Care Act. Fourteen million people would lose health insurance in the next year alone. While the White House rejected the CBO findings, Politico is reporting the White House’s own analysis predicts 26 million people will lose coverage under the bill over the next decade. According to the CBO, the bill would reduce the deficit by $337 billion, but one of the biggest beneficiaries of the Republican bill will be millionaires. A new study by the Tax Policy Center shows people in the top 0.1 percent would get a tax cut of about $207,000 under the plan. House Minority Leader Nancy Pelosi accused Republicans of attempting to push through the biggest transfer of wealth in the nation’s history. We speak to Elisabeth Benjamin, vice president of Health Initiatives at the Community Service Society of New York and co-founder of the Health Care for All New York campaign.

9 thoughts on “Trumpcare or Ryancare–Dead on Arrival? by Ellen Brown + Healthcare or Wealthcare?”