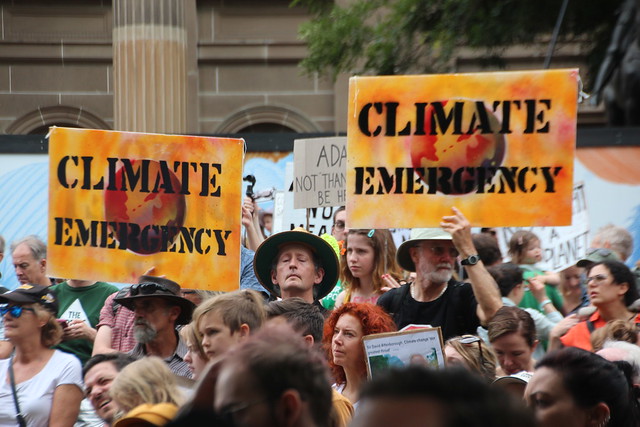 The glaciers in Alaska alone are losing an estimated 75 billion tons of ice every year. The oceans, which absorb over 90 percent of the excess heat trapped by greenhouses gases in the atmosphere, are warming and acidifying, melting the polar ice caps and resulting in rising sea levels and oxygen-starved ocean dead zones.

We await a 50-gigaton burp, or “pulse,” of methane from thawing Arctic permafrost beneath the East Siberian Arctic Shelf, which will release about 2/3 of the total carbon dioxide pumped into the atmosphere since the beginning of the industrial era. Some 150 to 200 species of plant, insect, bird and mammal are going extinct every 24 hours, 1000 times the “natural” or “background” rate.

This pace of extinction is greater than anything the world has experienced since the disappearance of the dinosaurs 65 million years ago. Chris Hedges speaks to journalist and author Dahr Jamail about his new book The End of Ice: Bearing Witness and Finding Meaning in the Path of Climate Disruption and the climate emergency.

The World Will End in Fire

Proclaiming that the end is nigh has now become the labor of the very opposite of a deluded religious devotee. And the question framed by Robert Frost of whether the world will end in fire or ice is no longer in dispute. The world will soon end in fire, possibly the fire of the Pentagon’s “usable” nuclear weapons, certainly the fire of anthropogenic climate collapse. Not only will the world not end in ice, but the vanishing of ice from the earth is helping to rapidly render this planet uninhabitable for humans and many other species.

As we observe up-close in Dahr Jamail’s new book The End of Ice: Bearing Witness and Finding Meaning in the Path of Climate Disruption, great masses of ice are melting away. Glacier National Park will soon lack any glaciers. Greenland, that ice-covered land falsely labeled green and distorted by northern prejudice to appear larger than Africa on most western maps, is being transformed into something you can spray through a hose . . . or drown in. Ice that most of us have never seen, but upon which our lives depend, is disappearing, not just quickly, but at a rate that is constantly becoming quicker, and even quicker, and quicker still.

The permafrost in the Arctic, Jamail tells us, is thawing and releasing methane, and could at any moment release methane equivalent to several times the total carbon dioxide released by humans ever. Barring that catastrophe, the feedback loops or vicious cycles are real and underestimated. When the glaciers melt, the streams warm up or dry up, ecosystems collapse, forests burn, and the glaciers melt more. By 2015, forests in California had become climate polluters rather than CO2 reducers. Jamail finds that every single worst case scenario predicted by the Intergovernmental Panel on Climate Change (IPCC) regarding temperature, sea level, severe weather, and CO2 in the atmosphere has fallen short. In fact, Jamail explains why the IPCC is generally not just excessively conservative but 10 years out of date. That figure places the IPCC’s late-2018 report claiming that humanity had 12 years left in which to change its ways and avert disaster in a harsh light.

While that IPCC report came out after Jamail wrote The End of Ice, it can add little perspective to a book that looks at our state of affairs far more clearly. Yet the fact that I am writing this review months before the book and this review will be published strikes me as somewhat obscene. What’s a quarter of a year, anyway, to wait to publish a silly book review? Well it’s an eighth of the 2 years one might conclude we have left to work with. But that would be clinging to fantasy. There is no preventing utter disaster. Yet there is urgency. The need is to work to slow the collapse and to mitigate its impacts and provide aid to each other as it washes over us.

The End of Ice takes us on a tour of magnificent and critically wounded areas of the earth, beginning in Alaska on Denali, which is changing — melting — dramatically. In many of the locations that Jamail takes us to, people have observed the warming for decades. Many people in the “developed” world, Jamail suggests, have not been connected enough to a place to notice — at least until now, when it is too late.

As Jamail travels the planet, he meets with top scientists, local officials, and other observers of what’s happening. One makes the point about Alaska being out-of-sight and out-of mind: “If this was happening in California, every one of these changes would be front-page news. That is why you’ve had no idea that Alaska’s glaciers are losing an estimated 75 billion tons of ice every year.”

Of course, that’s a very partial explanation of denialism, which has, by definition, consisted of denying something, not of being unaware of it. The news has been unwanted, especially by those paid not to want it. While Sarah Palin could see Russia from Alaska, there was no evidence that she saw Alaska from Alaska. In South Florida, which is doomed to go underwater, insurance rates are skyrocketing, the lengths of mortgages are shrinking, and construction — including of nuclear reactors — is booming. A grave for humanity might bear the word “Ignorance” or it might, just as appropriately, display an image of Ronald Reagan ripping solar panels off the White House roof.

Those living in some fortunate untouched inland suburb will not have the benefit of a lengthy warning in the form of direct impact. They can only warn themselves by caring what’s happening in other places ravaged by drought and flooding and storms and heat. Rather than sitting in the mythical warming pot alongside the poor slandered frog who actually knows better, people are on the comfortable stovetop next to the pot, about to be engulfed as the pot boils over.

Jamail finds his visits to natural wonders bittersweet and takes extra pleasure in spending time with doomed places. But I don’t think he intends to encourage morbid tourism. When he visits the Matanuska Glacier, he finds privatized profiteering from visits to the glacier’s receding edge. As the glacier melts, chainsaws take down trees, construction noise echoes, and ATVs buzz about — knowingly turning up the heat that such last-chance tourism industries fully feel.

Millions of humans depend on glaciers for drinking water. The countries where over half of humanity lives are over-pumping their aquifers. The rising sea levels accelerated by the melting ice will render a significant portion of humanity homeless. I fear that, beyond the physical feedback loops that scientists tell Jamail about, human feedback loops could worsen the coming crises. If people respond with greed, fear, bigotry, corruption, and violence, they will make matters far worse immediately, and by further fueling the climate collapse. Building walls to keep out refugees, and promoting the idea that climate disaster produces war (all by itself, without any human involvement, it would seem from many such predictions) is a recipe for catastrophe, possibly of the nuclear sort.

What to do is not the focus of The End of Ice, but some ideas come through, beyond that of enjoying what time we have. First, I think, we must cease adding to the methane and CO2. As war is the biggest producer of C02 around, making plans to use war as a response to climate collapse is one of the dumber moves available. As the meat industry is one of the greatest producers of methane around, enjoying some delicious end-of-times cooked flesh is not the solution. We need a radical reworking of our culture into the sort of society that could have survived had it reformed itself 30 years sooner.

Then we need to mitigate the damage, by helping those in need. We need to relocate people and other species out of areas that are going underwater, and not just people but the worst of their physical creations as measured by the degree to which they will poison the oceans if left behind. As long as there is some hope of reducing the speed or enormity of the damage, I will find an exclusive focus on mitigation to be an outrage. But even more outrageous is the fact that right now our society isn’t even trying to mitigate the damage.

I’ve never shared the widespread interest in hope or despair. We have a moral responsibility to do what needs doing. What more has to be said? But the work of the doctor/narrator in Albert Camus’ The Plague, which I’ve referred people to as a model is not quite right — or at least could be misleading. The importance of preparing for the plague at the first signs of it must be increased dramatically. And one cannot simply plod along, working long hours, until the plague has run its course. This plague ends us before it runs its course. We have to dedicate ourselves to ending with dignity and kindness, with the closest thing we can manage to the grace and wisdom that could have saved us. And then we have to rededicate ourselves to redoubling our efforts, again and again, with ever greater effort as we continue. The alternative of giving up is guaranteed not to be more enjoyable than working well together on a crisis that could bring out the best in us. The alternative of pretending everything is normal, scorning radical activism, and contenting ourselves with voting in yet another “most important election of our lifetime” every two years is guaranteed to create a crisis of faith and a crisis of guilt. Let’s not go there. Or rather, let’s not stay there.

11 thoughts on “Chris Hedges and Dahr Jamail: The End of Ice + The World Will End in Fire by David Swanson”