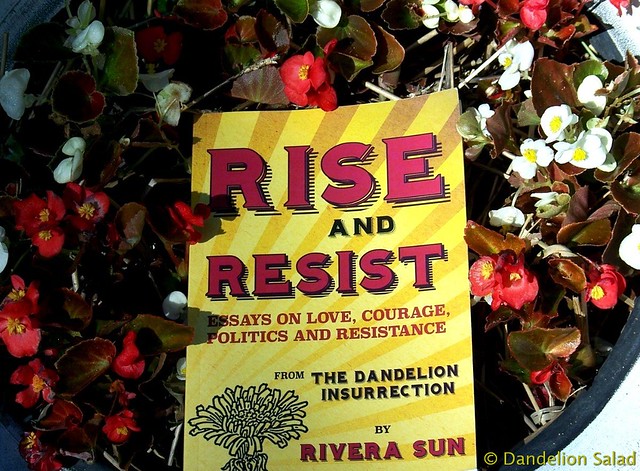 Fiction meets reality in these impassioned and hard-hitting essays on love, courage, politics, and resistance.

Rise and Resist brings to life the essays of the underground resistance writer Charlie Rider from The Dandelion Insurrection. The words are a rallying cry, a balm to the soul, and fuel for the fire of social change. In a printed collection for the first time ever, here are the essays that ignited a mass movement for change in a fictional United States “just around the corner of today”.

Written under the nom de plume: the Man From the North, this fictional writer lifts a pen mightier than a sword to offer provocative and relevant essays for his world . . . and ours. You can find the book here.

On the Man From the North in The Dandelion Insurrection:

“The Man From the North. Even the mere mention of the writer’s name evoked a sweat of admiration, envy and fear. His articles were slipped hand-to-hand, smuggled across the border from Canada, taped in the back of pocket bibles. All through the winter, the man tore apart the corporate-controlled government, decried the rising tide of militarism, and lambasted the grind of economic injustice that held millions in a death grip. The Man From the North also regaled his readers with real life stories of courage in the face of oppression. He touched their hearts with passionate tales of kindness in a time of darkness. People looked out their windows at night and thought: we are not alone in wanting a better world than this.“ – from The Dandelion Insurrection by Rivera Sun

The essays from the Man From the North are timely and inspiring. They are not found in The Dandelion Insurrection, The Dandelion Insurrection Study Guide – making change through nonviolent action, or in The Roots of Resistance. The essays can be enjoyed separately from the novels. Whether you read all the books together or each separately these books are a powerful experience and one you will never forget!

From the archives: selected essays from The Man From the North:

8 thoughts on “Rise and Resist!”