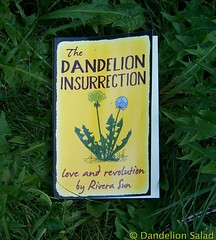 I wrote to the young Ms. Sun, told her how much I enjoyed her book and questioned what I considered the strategic weakness of the book’s politics. To my surprise, this very busy lady not only replied promptly, but sympathized with my critique and reminded me that The Dandelion Insurrection was merely the first book of a trilogy and implied that the arch of strategy would manifest itself in the coming editions.

The second part of the trilogy, The Roots of Resistance, made its appearance just days after our email exchange. I immediately downloaded an e-book edition that I’ve just finished. Taraxacum officinale! (= dandelion) Forget good read, think great! This book educates, inspires and humbles. When I had read the 4th chapter I wrote to Rivera and thanked her for the description of John C. Friend, the politician, THE politician exemplifying them all, the servants of the plunder monkeys. I told her that the description of Friend alone was worth the price of the book, not knowing then that the analysis deepened.

Love is woven throughout the book, love as strong as the determination of life, and nonviolence forms a major theme; not the goody-goody kind, the nice, moral or comfortable kind, but courageous nonviolence as a necessity to succeed in the struggle for a better world.

Thanks Rivera Sun, and congratulations to everyone who has the opportunity to hop on the Dandelion Trilogy.

”When the truth is ugly, politeness is just another way of lying.”

”Resistance is more than a battle; it is the indomitable presence of life against forces of destruction.”

from The Roots of Resistance by Rivera Sun

9 thoughts on “Dandelions and Plunder Monkeys by System Humanity”