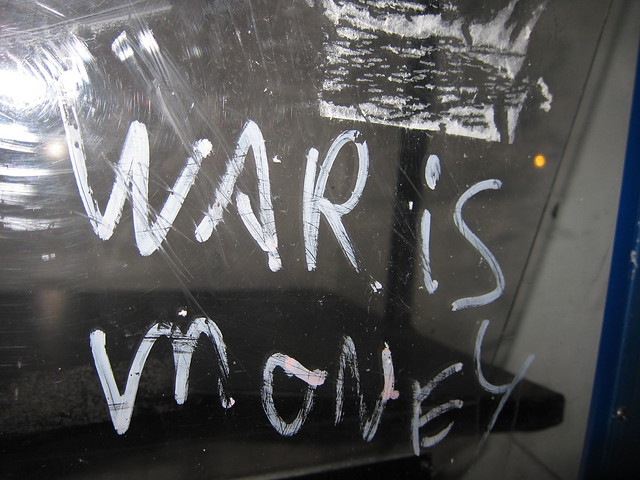 Chris Hedges discusses with Andrew Cockburn his new book, The Spoils of War – Power, Profit and the American War Machine.

Cockburn’s book lays bare the naked lust for profit that is behind America’s endless wars and bloated military budget. The American war machine, he writes, can only be understood in terms of the “private passions” and “interests” of those who control it – principally, a passionate interest in making money.

Thus, Washington expanded NATO beyond Germany, breaking a promise to Russian leaders, to open up the lucrative arms market in Eastern Europe to defense contractors. The US Army insisted on furnishing soldiers with defective helmets from a favored contractor that magnified the trauma and traumatic brain injury caused by an explosion.

The US Navy’s Seventh Fleet deployments were for years dictated by a corrupt defense contractor known as “Fat Leonard” who bribed high-ranking officers with cash, drunken parties that lasted days, and prostitutes known as the “Thai SEAL team” to ensure his more than $200 million in contracts.

The Air Force spent $50 billion in esoteric devices to deter insurgents’ homemade $25 bombs, including the $100 million Lockheed EC-130H aircraft supposedly equipped with ground-penetrating radar that could detect buried bombs. Only after hundreds of flights was the device found to be useless. Senior Marine commanders agreed to a troop surge in Afghanistan in 2017, not because they thought it would work, but “because it will do us good at budget time.”

Cockburn provides example after example that exposes the ugly reality of the largest military machine in history, at once corrupt, squalid, and terrifyingly dangerous.

Watch on RT.com or on Portable.TV.

David Swanson: Those 80 Dead Were All Human Beings

Will Griffin: The Fight Against Raytheon

3 thoughts on “Chris Hedges: The Spoils of War – Power, Profit and the American War Machine”