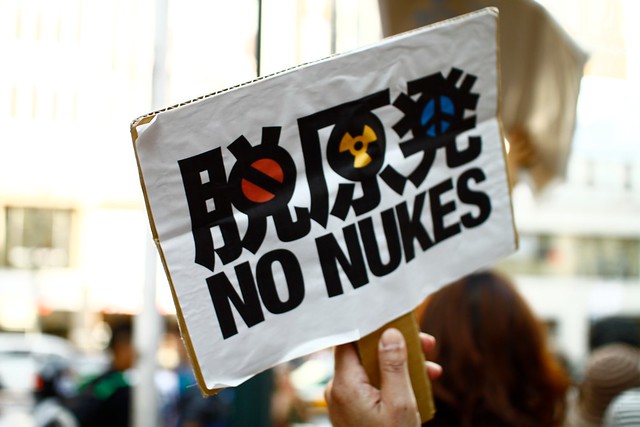 Threatening to make attacks with nuclear weapons is known as “deterrence” when the United States does it, but it’s called madness, blackmail, or “terrorism” if Russia, China, or North Korea does.

U.S. Air Force thermonuclear weapons, about 100-to-150 of them known as B61s, are stationed at two NATO bases in Italy, and at one NATO base each in Belgium, The Netherlands, Germany, and Turkey. These 170-kiloton H-bombs — 11 times the force of the Hiroshima bomb — are always described euphemistically as “theater” nuclear weapons, defensive ones that are a “deterrent” to aggression.

Of course, Russian aggression in Ukraine has shown nuclear “deterrence” to be an expensive, destabilizing, terroristic fraud. That our high, holy, sacrosanct, and unquestionable arsenal of “deterrence” did not deter Russia on February 24, 2022 is dreadfully, painfully, catastrophically obvious. Yet the nakedness of the deterrent-less Emperor has hardly been acknowledged.

In the ghastly maw of ongoing war in Ukraine, the needless provocation of stationing U.S. thermonuclear B61 H-bombs at six NATO base’s facing Russia could hardly be more frightening. Then, as if to scream “fire” in the crowded auditorium, NATO’s ministers on June 30 issued their latest “Strategic Concept,” a public relations version of the alliance’s ongoing threat to wage indiscriminate, uncontrollable, and poisonous mass destruction using U.S., French and British nuclear warheads.

The Strategic Concept’s soothing, cotton candy version of NATO’s open embrace of nuclear terrorism is this: “NATO will take all necessary steps to ensure the credibility, effectiveness, safety and security of the nuclear deterrent mission.”

At the moment however, the B61 hydrogen bombs stationed at Germany’s Büchel air base cannot credibly be a part of the “mission” since they can’t be attached to Germany’s Tornado fighter jets. This is because the base’s runway is being rebuilt. Until 2026, Büchel’s 33rd Fighter-Bomber Wing of Tornado jets are based at the nearby Nörvenich air base.

For Kathrin Vogler, a Left Party member of the German Parliament in 2021, this is a chance to denuclearize Germany. The politician told the daily paper Rhein-Zeitung last year that “From June 2022 to February 2026, flight operations at Büchel Air Base will be largely discontinued and transferred to the Nörvenich military airfield…. This was confirmed to us by the German government in our minor inquiry. As far as we know, the 20 or so nuclear bombs stored at Büchel will remain there.”

“This means that German nuclear sharing will effectively not take place for four years from 2022,” Volger told the paper.

“This exposes the argumentation of the German government, which repeatedly claims that nuclear sharing is an important part of NATO’s deterrence strategy. In fact, maintaining it and thus also the Büchel nuclear weapons site is pure symbolic politics, albeit with high risks for the population. Therefore: The suspension of nuclear sharing must become a phase-out, [and] now would be a good opportunity to do so,” Volger said last year.

As of February 24, 2022, NATO’s nuclear weapons arsenal’s “fundamental purpose” has been utterly delegitimized, politically pulverized, and militarily reduced to ashes. The alliance’s nuclear arsenal can finally be removed without any loss of face, much less any loss of security.

NATO’s latest “concept” accidentally acknowledges the uselessness of retaining nuclear weapons in its recognition that, “The strategic nuclear forces of the Alliance, particularly those of the United States, are the supreme guarantee of the security of the Alliance.”

This is the terrible farce of nuclearism. If nuclear weapon threats guaranteed any security at all, none of the tens of billions of Euro-dollars’ worth of military training, weapons, mercenaries, cyber warfare, or intelligence assistance that NATO partners and Russia are now pouring into Ukraine would be necessary.

Nuclear-armed alliances are a thing of the past which must be and now can be abolished. Under the auspices of the Treaty on the Prohibition of Nuclear Weapons, along with the Treaty on the Nonproliferation of Nuclear Weapons, international law provides a pathway, training wheels, guide rails and a motorcade — courtesy of the great majority of the world’s governments — to a world where conflict and even wars don’t endanger whole civilizations and the biological integrity of life on earth.

John LaForge, syndicated by PeaceVoice, is Co-director of Nukewatch, a peace and environmental justice group in Wisconsin, and is co-editor with Arianne Peterson of Nuclear Heartland, Revised: A Guide to the 450 Land-Based Missiles of the United States.

What I Would Tell A Future Generation About Us On This Tiny World, by Kenn Orphan

David Swanson and Daniel Ellsberg: The Most Dangerous Missiles

5 thoughts on “Deterrencelessness: Nuclear Threats Neither Credible Nor Viable, by John LaForge”