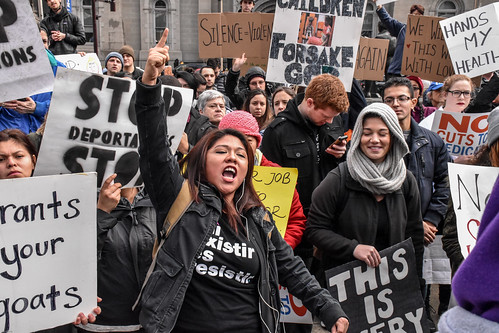 We republish here a response by Bill Dores, an activist since he joined Youth Against War and Fascism in 1968.

On Aug. 12, 1962, my organization, Youth Against War and Fascism, held the first protest in this country against the Vietnam war. About 70 people came to our picket line in New York. Few people in the U.S. were aware that U.S. military “advisers” were fighting against the Vietnamese people at that time.

That was a bit before my time. I became active in 1968, after the Tet Offensive — when the Vietnamese National Liberation Front stunned the then half-million U.S. troops by seizing major parts of the country for a few weeks in February — and the murder of Dr. Martin Luther King Jr. in April.

By then the body count of U.S. troops killed and the cost of the war had skyrocketed. Hundreds of thousands were marching in the streets against the war. Students were shutting down campuses. GIs were starting to rebel. Dr. King had spoken out against the war a year before his assassination. By the fall of 1969, Nixon was in the White House and a million people filled the streets in National Moratoriums against the war.

Should we have said, “Where were you clowns seven years ago, when we happy few were protesting the war alone? You Johnny-Come-Latelys are only here because more GIs are dying, there’s a Republican in the White House and the Establishment itself is split on the war”?

That would have been foolish. The point was not moral purity, but to actually try to build a movement to stop the war. We threw ourselves into the new movement and tried to make it more militant.

We injected the slogan “Stop the War Against Black America” and raised the issue of Palestine. Sometimes we had to battle official marshals to do that, but it couldn’t have happened if we hadn’t been there.

In November 1969, when half a million people rallied in Washington against the war, we, together with Students for a Democratic Society, led a breakaway march of 20,000 that stormed the Justice Department in defense of the Black Panther Party.

The night before, thousands of us battled the cops in the streets of Washington’s Georgetown neighborhood as we tried to seize the Saigon regime’s Embassy — the U.S. supported a puppet government there — on behalf of the Provisional Revolutionary Government of Vietnam.

Fast forward 30 years to March 1999 and the Bill Clinton regime’s air assault on Yugoslavia. The International Action Center, many of whose older members had been in YAWF, organized just about the only protests against that war in alliance with some Yugoslav organizations. We organized marches in several cities, a march on Washington, and a war crimes tribunal against the Clinton administration and the European NATO leaders, who also backed the destruction of that multinational country.

Thousands of Yugoslav-Americans came out in protest, many for the first time. Some had voted for Clinton; others were Republicans and voted for Bush ­Senior.

Did we say, “Where the hell were you eight years ago when Bush was bombing Iraq? And where were you last month when the New York Police Department murdered Amadou Diallo in a hail of 41 shots?”

Of course not. Of course, people will respond first when they are attacked directly. It opens their eyes. We said, “Welcome to the struggle; let’s try and stop this war.” A few years later, when Bush Junior invaded Iraq, many of them joined the protests.

I find it incomprehensible that anyone on the left or who claims to be anti-imperialist is complaining that people are in the streets against the class enemy’s new commander. If you have been at the protests, you have seen that most people there were young and many from the communities most under attack. Others were from the Black Lives Matter and immigrant rights movements and have been in the streets under Bush and Obama. (Were all those who criticize the Trump protests there with them?)

A major aim of capitalist-run electoral politics is to direct people away from street demonstrations to the confines of the ballot box. Now, people are in the streets. The fear of provoking a popular upsurge was one reason many in the ruling class were leery of Trump in the first place.

Do the anti-Trump protesters need to understand Syria and Libya to protest Trump’s openly proclaimed plans to escalate the war against Black and Brown people here? If we anti-imperialists are with the people in the streets, we have an opportunity to explain the other issues to them.

Are some of them misled by the Democrats? That’s the role of the Democratic Party — to mislead. It’s only by being in the struggle and by being in contact with revolutionary ideas that the protesters learn.

Revolutionary change depends upon people coming into motion who were not active before. The point is to get people in motion.

Where else do you expect the human material for revolution to come from? It’s in the process of struggle and confrontation that people become radical.

The 1905 Revolution in Russia began with people following a priest in a march that appealed to “the good czar, our little father,” asking him for some reforms. The “good czar’s” police fired on that march.

Twelve years later, women in St. Petersburg went out on strike on International Women’s Day. The men didn’t join until the next day. (The women didn’t scold them for not being there “yesterday.”) Five days later, together with Army troops, the women and men workers overthrew the czar and started on the road to the socialist revolution eight months later.

My first political act, when I was very young, was giving out flyers for Sen. “Clean Gene” McCarthy, who had the reputation of being against the Vietnam War, although he too was for U.S. imperialism. Within weeks, I was supporting the Black Panthers and running in the streets with the flag of Vietnam’s National Liberation Front.

Come to think of it, we in Workers World Party organized the only demonstrations in the country that I know of against fascism in Ukraine, defending the rebellion in the eastern provinces now called Novorossiya, and supporting Russia’s annexation of Crimea from the pro-fascist Kiev regime. We have also marched against U.S. intervention in Syria.

We wonder if the purists now scorning the anti-Trump protesters were there at these demonstrations. Probably not, or the demonstrations would have been much larger.

But if they join now, we won’t try to keep them away.

31 thoughts on “The Anti-Trump Protests: Don’t Ask: Where Were You For The Last 8 Years? by Bill Dores”