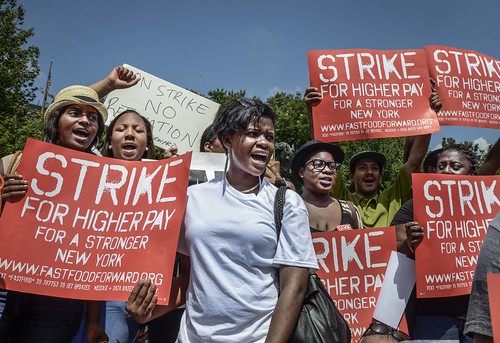 A NEW report by the Economic Policy Institute (EPI) lays out in clear and horrifying detail the scale and spread of wage theft in the U.S.

The report focuses on workers who are cheated out of the already abysmally low minimum wage. Over the last 40 years, real wages have stagnated for most workers, and the situation of low-wage workers is even worse. The current federal minimum wage of $7.25 an hour is, after adjusting for inflation, 25 percent lower than it was 50 years ago. It doesn’t adequately support a single person, even those who get full-time hours, much less families.

Some states and counties now have minimum wages higher than the federal minimum, but even these are inadequate for a decent standard of living. For example, in Seattle, where the minimum for many workers will soon be $15 an hour, an average apartment costs $1,600 a month.

At this rate, even with full-time hours, housing alone would take up almost two-thirds of a worker’s gross income. Raising a family or even supporting one other person on this wage is a nearly impossible task.

BUT THAT’S not the end of the story. Employers are trying to cheat workers out of even these paltry minimum wages, according to the study.

The EPI estimates that being paid less than the state and federal minimum wages costs workers at least $15 billion a year. This is more money than is lost to thefts of other types–yet it’s barely noticed as a crime. Meanwhile, workers suffering from wage theft have three times the poverty rate of other low-wage workers.

One of the key findings of the report is how wage theft is based on and reinforces racism and sexism. The EPI notes:

Young workers, women, people of color and immigrant workers are more likely than other workers to report being paid less than the minimum wage, but this is primarily because they are also more likely than other workers to be in low-wage jobs. In general, low-wage workers experience minimum-wage violations at high rates across demographic categories. In fact, the majority of workers with reported wages below the minimum wage are over 25 and are Native-born U.S. citizens, nearly half are white, more than a quarter have children, and just over half work full time.

Why is wage theft such a problem now? The EPI makes it clear that part of the problem is cutbacks at the U.S. Department of Labor’s Wage and Hour Division, the agency responsible for investigating minimum wage violations. According to the EPI:

In 1948, there was one investigator for every 22,600 covered workers; today it is one per every 135,000 workers. As the number of investigators per worker has shrunk, so has the agency’s ability to effectively police violations of labor law: from 1980 to 2015, the number of cases investigated by the agency decreased by 63 percent.

Lack of enforcement goes hand-in-hand with the deregulation of the economy and austerity that have dominated since the ruling class adopted neo-liberalism in the 1970s.

ALTHOUGH WAGE theft and low wages generally are severe problems that affect the lives of millions, they’re only the tip of the iceberg. The fundamental problem in the capitalist economy is exploitation–meaning that owners live off the labor of workers by not paying them the full value of what they produce.

Exploitation exists in all spheres of the economy. Fast-food workers may produce $50 or more worth of value per hour while being paid $10 an hour or less. The rest goes to the franchise owner or the main corporation. Some of that goes to pay for expenses, but the rest goes into their pockets as profit. The CEOs and corporate owners live high off the hog while workers barely scrape by.

This process takes place even among higher-paid workers. Machinists who make $40 an hour produce airplanes worth billions. High-tech workers may be paid $100,000 a year, but they produce products and services that their companies sell for millions.

Exploitation is built into the DNA of capitalism. Corporations have to maximize profit to survive the competition with other companies. That means they have to cut wages as much as they can.

This report provides information that can be used in the fight against wage theft, low wages and exploitation generally. It concludes that more severe penalties against employers who steal wages would help reduce wage theft. It also implies that more enforcement of wage laws is needed.

The EPI reports points out some good starting places, such as severe penalties against employers who steal wages and greater enforcement of wage laws. But for labor activists and people concerned with workers’ rights, there is much more that we can organize around.

The movement across the U.S. for higher minimum wages has had a tremendous impact on the lives of low-wage workers. Wages far above the paltry $7.25-an-hour federal minimum wage have been passed in many areas of the country. This has happened in large part because of the strikes, rallies and protests led by low-wage workers.

Especially in the anti-immigrant climate orchestrated by the Trump administration, immigrant workers are afraid to report wage theft. This in turn lowers average wages and puts a downward pressure on the wages of all workers.

Wage theft is only a part of the overall exploitation of all workers. All workers are cheated out of the full value of what they produce. The fight against wage theft will only finally be successful when we abolish an economic system based on exploitation.