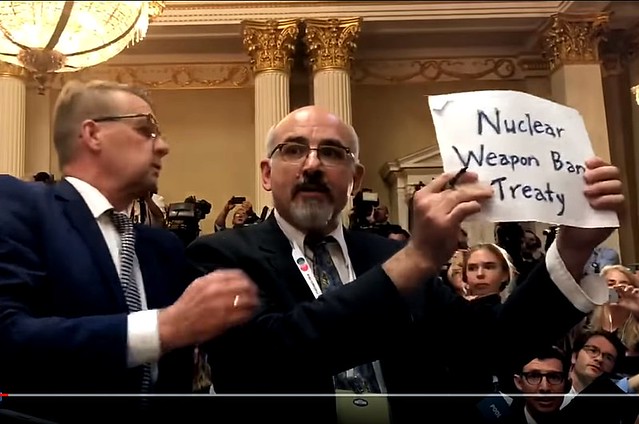 At the big “Treason Summit” “Russopocalypse” “Catastrovent” on Monday, journalist Sam Husseini tried to ask a question about banning nuclear weapons, and was physically hauled out of the room by officials from the “Land of Press Freedom,” Finland. Meanwhile, an Associated Press reporter was permitted to ask a perfectly respectable question pushing a blatant lie that risks nuclear war. Yay for press freedom!

The AP reporter claimed that “every U.S. intelligence agency has concluded that” the Russian government interfered in the U.S. election of 2016. In fact, the report that this common lie always refers to was concocted by a group of “hand-picked” (James Clapper’s description) people from three agencies out of 18 or so. The three were the NSA, FBI, and CIA — none of which ever, ever lie or get things wrong, ever. The INR and DIA were excluded along with all the others.

That’s why the Associated Press told a lie. Here’s why it’s a blatant and dangerous lie. The same report didn’t conclude a damn thing. It just “assessed,” which is a weasel word for guessed. Of the three agencies involved, two assessed with high and one with moderate confidence that Russia did something or other to benefit Trump. Whether that something was revealing to the public the DNC’s slanting of its primary against Bernie Sanders we are not told. We are also not offered any evidence for whatever it was. We are also not told Trump was involved in it, or offered any degree of assessment of that, much less any evidence. We are also not given any claim that informing us about the DNC’s shenanigans, or any other actions, had any impact on the outcome of the election. We also are not presented any case that keeping the rigging of primaries secret from the public is essential to the sanctity and freedom of our democracy.

But here’s where it gets frightening. Unknown people produced an unread report that claims very little on behalf of very few but has not only become the gospel handed down by the “Intelligence Community,” but thousands of writers, bloggers, and tweeters between Monday and Tuesday have announced that one must choose either to believe this gospel or to side with The Russian Enemy. And the unknown propagandists who produced the ridiculously vacuous report have been turned into The Troops, and The People Who Risk Their Lives to Protect Us — this language now being used by all sorts of people clogging up my social media, including some pretty well-known ones like Michael Moore.

I asked one such liberal advocate for believing the brave CIA spies who protect us how exactly they risked their lives and what they protected him from, and he replied that they risk their lives because Russia shoots down airplanes and poisons people. In other words, the same crowd that claims Russia shot down a plane over Ukraine and poisoned people in England now gets Sacred Troop status conferred upon its additional allegations through the circular logic that because it accused Russia of deadly crimes its accusations against Russia are brave and not to be questioned. (Deadly crimes bombing people in Syria don’t count because those are good decent deadly crimes.)

And here’s where this seems to take us, as some of us have been warning for a year and a half: Endless indisputable impeachable offenses by Donald Trump continue to pile up. And nobody cares. Top Democrats have found what they stand for. A sustainable earth? Peace? Justice? Social prosperity? Clean elections?

Are you crazy? They stand for Russophobia. Now if Trump were to actually be impeached, even if for a legitimate reason, what would be President Pence’s best move to reassure liberals? Bombing Russia. If Democrats hold off impeachment (something for which some of them seem willing to actually risk their lives) what will they spend two years campaigning for the throne on? Hating Russia, punishing Russia, attacking Russia. It’s their way to out-Republican the Republicans, and they LOVE it. The U.S. public mostly doesn’t care, but the ones who get involved in electoral politics are in ecstasy.

The fate of the earth may just depend on somebody creating a television network in the United States not dedicated to hating Russia on the one hand or basic human decency on the other. In the meantime, a big thank you to Democracy Now for getting this one right and having Sam Husseini on the show. [see video below]

https://democracynow.org – Before Monday’s highly anticipated joint press conference with President Trump and Russian President Vladimir Putin, one of the reporters was forcibly removed from the room. Sam Husseini was credentialed to cover the summit for The Nation magazine, and earlier in the day he tweeted, “The issue isn’t Trump. The issue isn’t Putin. The issue is the issues: Nuclear threats, Syria, etc.” Before Trump and Putin spoke at the press conference, video shows Husseini holding a piece of paper that reads “Nuclear Weapon Ban Treaty.” A security official aggressively tries to take the sign from him. We speak with Husseini about his arrest and the questions he was trying to raise. “It wasn’t a protest,” he says. “It was just an attempt to do serious, aggressive journalism, which I think is what we need.”

Debate: Is Trump-Putin Summit a “Danger to America” or Crucial Diplomacy Between Nuclear Powers?

https://democracynow.org – As President Trump meets with Russian President Vladimir Putin in Helsinki, we host a debate on U.S.-Russia relations. In Washington, D.C., we speak with Joe Cirincione, president of Ploughshares Fund, a global security foundation. In Rio de Janeiro, Brazil, we speak with Glenn Greenwald, Pulitzer Prize-winning journalist and one of the founding editors of The Intercept. Greenwald calls the Trump-Putin meeting “excellent” and adds that President Obama also sought diplomacy with Russia. Cirincione calls the summit “a danger to America and to the West.”

https://democracynow.org – Watch Part 2 of our debate on U.S.-Russia relations as President Trump meets with Russian President Vladimir Putin in Helsinki. In Washington, D.C., we speak with Joe Cirincione, president of Ploughshares Fund, a global security foundation. In Rio de Janeiro, Brazil, we speak with Glenn Greenwald, Pulitzer Prize-winning journalist and one of the founding editors of The Intercept.

Liberals These Days are Largely Cold Warriors by William Blum

7 thoughts on “The Intelligence Community is Neither by David Swanson + Sam Husseini Dragged out of Press Conference + Debate: Glenn Greenwald VS Joe Cirincione”