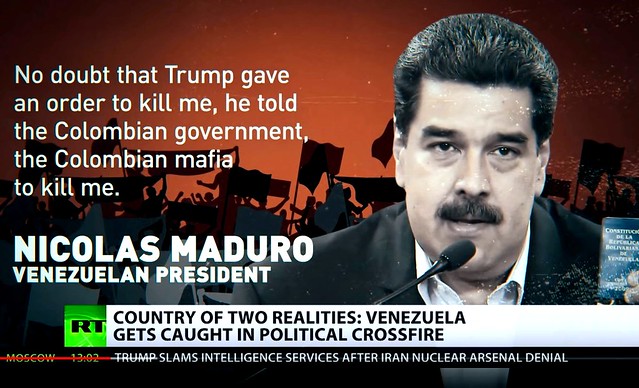 With Will Griffin
Writer, Dandelion Salad
The Peace Report
February 1, 2019

If US intervenes, it will have another Vietnam war – Maduro

Venezuelan President Nicolas Maduro called on the people in the US to deter the Trump administration from putting boots on the ground in Venezuela, warning that any intervention would backfire leading to new Vietnam-like disaster.

Nicolás Maduro Venezuelan President: “Let us not allow another Vietnam war in my homeland.”

“People from USA, I ask for your support in order to reject the interference of Donald Trump’s administration which intends to turn my Homeland into a “Vietnam war” in Latin America. Don’t allow it!”

Washington’s forced regime change strategy targeting Venezuela continues unabated. Everything is going to plan. First, sanction the country in ways that punish the poor. Second, back a so-called interim president in Caracas. Third, deny the legitimate government of its export revenues. Is the use of force next? CrossTalking with Pablo Navarrete, Miguel Tinker Salas, and Paul Dobson.

US recipe to overthrowing governments

6 thoughts on “Will Griffin: Updates on Venezuela + Nicolas Maduro: Let Us Not Allow Another Vietnam War In My Homeland + US Recipe to Overthrowing Governments”