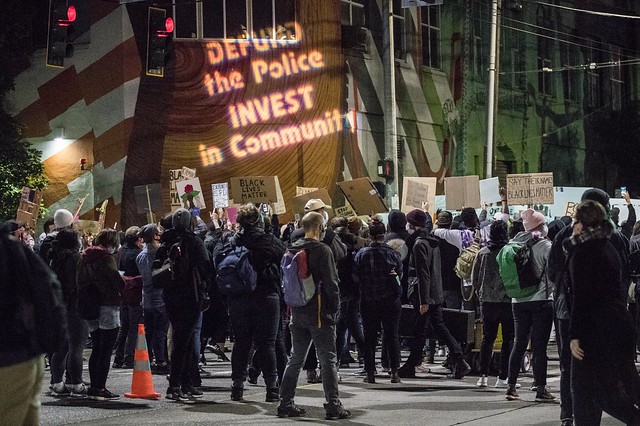 Democrats in the House of Representatives today passed a police funding bill aimed at further distancing themselves from the movement against racist brutality that burst onto the scene in 2020. While many Democratic Party politicians cynically attempted to position themselves as supporters of the movement when it first emerged, now they are showing their true selves – loyal supporters of the cops.

Four bills advanced through the House today as part of a single package. The centerpiece is the “Invest to Protect Act of 2022” pushed by Rep. Josh Gottheimer, a former Bill Clinton speechwriter who went on to hold senior positions at Ford and Microsoft. This bill allocates additional funding for police agencies that have fewer than 125 members, primarily for recruitment incentives aimed at bolstering the number of cops on the streets and enticing them to stay on the job with significant cash payments. This is in line with the Biden administration’s proposal to expand the country’s police agencies with 100,000 additional officers.

Gottheimer noted in an official statement that he was “especially appreciative of the support and input from the National Association of Police Organization (NAPO) [and] the Fraternal Order of Police (FOP)” on the bill.

There are three other bills packaged together with “Invest to Protect”. These include measures to encourage a non-police response to mental health crises and funding for violence interrupter programs that have proven effective at improving public safety. But the fact that these relatively mild reform measures had to be paired with a bill crafted in part by cop “unions” that pours more money into police forces across the country shows how little support there is for the movement against racism among the ranks of elite Democratic Party politicians.

The police funding package advanced by a single-vote margin: 216 to 215. The Congressional Progressive Caucus initially raised objections, but folded after the upper limit to qualify for the additional funding was reduced from 200-member forces to 125-member forces. Six members of Congress associated with the progressive “Squad” grouping still objected, but after last minute negotiations the package went forward with five voting no but Ayana Pressley abstaining from the vote, allowing it to pass.

The strength of the historic 2020 uprising forced the leadership of the Democratic Party to temporarily reorient and accept elements of the program and rhetoric of the movement for Black lives. But as the intensity of the rebellion faded, pro-police forces went on a counter-offensive, demagogically taking advantage of people’s legitimate concerns about violence. The Democrats’ leadership is now portraying police reform as an electoral liability, falling over themselves to show that they oppose the demand to defund the police.

The police in the United States are out of control, routinely denying people the most basic democratic rights like due process, equal protection under the law and protection from unreasonable search and seizure. This has been true throughout the entire existence of this country, and the situation is only getting worse as more and more money and militarized equipment is poured into police forces nationwide.

And the police are completely ineffective when it comes to preventing violent crime! Especially in oppressed communities, people know that the police never seem to be there when someone is actually in danger, but always present when it comes time to carry out petty harassment or worse. We need a new approach in which neighbors are empowered to come together to resolve problems and direct resources where they are needed to address the root causes of violence. But the Democrats are simply interested in pledging allegiance to the cops.

© Copyright 2022. Content may be reproduced with credit to LiberationNews.org.

Police Are a Lie, by David Swanson