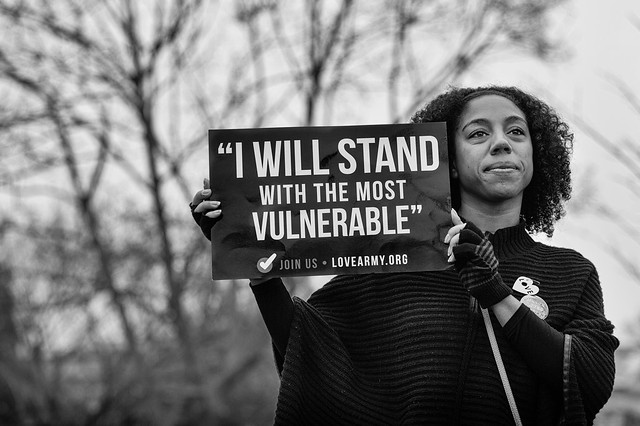 The Essays of The Man From the North by Rivera Sun
Writer, Dandelion Salad
January 22, 2017

The challenges that confront us loom imminent, yet still unknown. Like dangers in the dark, we can sense but not clearly see them. Our government is preparing new assaults upon our rights and maneuvering more regressive unjust legislation through the machine of the political apparatus. The wealthy scheme up new ways to rob and impoverish us. Corporations craft increasing ways to profit, even if it means destroying our water, air, land, and health. We are facing dangers on all sides, in shapes and sizes we can barely imagine.

To wait for each new offensive to roll out puts us in a risky and vulnerable position. We must prepare our communities to respond with versatility and courage. In every town, neighborhood, city block, and rural region, we must gather in groups and form strong connections, networks, and coalitions. We need to bring people together to learn the basics of nonviolent struggle, the tactics and types of actions, the strategies and the how of what makes it work. We must show the dynamics of participation, noncooperation, repression, and the need for nonviolent discipline.

In our local communities, every member of the Dandelion Insurrection needs to put our golden minds and beautiful heads together. We must articulate the unknown. We must speak the uncertain. We must identify as much about what we think is coming . . . and then we must prepare to meet it.

Craft plans to thwart each threat. Train every member of your community in numerous contingency plans and strategies. From the oldest grandmother to the children who have just learned to read, every person should have knowledge of the many ways we can meet the many types of challenges we might face. Your neighbor should know that if X happens, we will boycott Y. The schoolteachers should be able to explain that if such-and-such a piece of legislation passes, then we will mobilize such-and-such mass civil disobedience against that unjust law. For every possibility, we can prepare a basic strategy of resistance.

And in preparing for the unknown, we become able to confront all possibilities.

The muscles of our nonviolent people-power gather strength. The knowledge of this type of resistance becomes as common as the knowledge of how to use can openers and light switches. Our leaderless movements transforms into leaderfull. Every person knows how to act. We build the skills in our friends and neighbors for analyzing the dangers and strategizing the response.

As our preparation builds, our well-prepared defense begins to serve as a deterrent against attack. If those who would harm our communities know that we have the ability to thwart them, the chances of their assault decrease. Even if they move ahead, we are now prepared to resist.

We can thank our predecessors for the theory of nonviolent-based defense. To deter fracking, citizens of Quebec strategized and trained their villages to such a degree that the industry was held at bay for over a decade. The gas company had been warned – right down to the dollars and cents it would cost them to “invade” – how well-prepared the citizens were to stop them. They mapped out roads and rural routes to proposed drilling sites and planned exactly how to launch blockades. They trained hundreds of people in the skills of locking down, setting up roadblocks, peaceful protest and noncooperation. An emergency phone system was set up to alert citizens if the fracking industry began to drive into the area again. Strategies for banning the gas company from accessing the water sources required for hydraulic fracturing were prepared by both citizens and public officials. An announcement of the millions of dollars, day-by-day, the citizens were prepared to make the gas company pay in delays, fees, and hiring police or other agents of repression was sent to the shareholders and investors in the drilling project.

We need to know our history. Our forbearers in nonviolent struggle gained hard-won lessons that we should learn and apply in our own situations. Far too many struggles failed because they reacted instead of initiated. They allowed the opposition to lead the charge, and never regained the timeline or the high ground of social change. We do not need to wait for what is coming … we can rise to meet the times. Like sentinels, we can be watchful, wary, and well prepared.

The Dandelion Insurrection in every corner of this country can train, strategize, mobilize and stand at ready. Then, our opponents will feel the rumble of our actions. They will hear the roar of our determination rising. Those dangers looming in the dark will hesitate.

And if the forces of destruction and injustice dare to launch their attacks, our nonviolent defense will be ready to defeat them.

Not One Penny More to the Rich!

13 thoughts on “We Are Facing Dangers On All Sides”