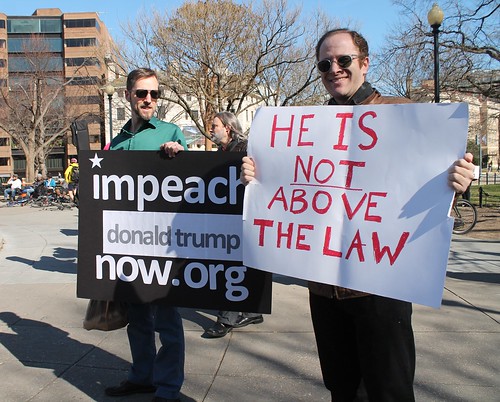 The Constitution suddenly seems to have bestirred itself and declared itself, through its many Washington spokespeople, to be in crisis.

I’m sorry, interjects the world, but what the hell took you so long?

We laid out the clear Constitutional violations of Trump’s financial and business interests on the day he became president (in the real sense, not the media event months later when “He finally became president” by bombing enough people) at ImpeachDonaldTrumpNow.org.

Since the later hours of Day 1 back in January through the present instant, the clear and documented (when not openly bragged about) Constitutional offenses have been piling up.

As of a 2015 disclosure to the Federal Elections Commission, Trump owns stock in the maker of the missiles he sent into Syria, Raytheon, as well as numerous other weapons makers, Canadian tar sands, etc. Trump has continued, escalated, and threatened numerous illegal and immoral wars. That he may be personally profiting from them just adds to the supreme international crime, which of course already violates the U.N. Charter and the Kellogg-Briand Pact, supreme laws of the U.S. under the Constitution.

Trump has unconstitutionally discriminated against refugees, been stopped by the judiciary, and immediately done it again.

Trump has pushed policies that will aggravate climate change, a crime against humanity that can be prosecuted by the International Criminal Court even against a non-member. On December 6, 2009, Trump signed a public letter to President Barack Obama urging action to protect the earth from climate change. “If we fail to act now,” the letter read, “it is scientifically irrefutable that there will be catastrophic and irreversible consequences for humanity and our planet.” Trump is knowingly endangering all human (and many non-human) residents of the United States, right along with the other 96% of humanity.

Trump openly sought to intimidate voters prior to his election, and fought the counting of ballots where they existed, was elected with a minority of votes, was elected with numerous votes uncounted and numerous voters blocked from voting by the partisan stripping of the rolls and by ID laws, following a nomination principally decided by dramatically biased media coverage. If none of that put the Constitution into crisis, why keep the rotting document around at all?

Pre-presidency but still available grounds for impeachment, Trump violated, according to the list in Alan Lichtman’s book on Trump impeachment, the Fair Housing Act, New York charity law, tax laws, the Cuban embargo, casino regulations, the RICO statute, laws against employing undocumented immigrants, and of course laws against sexual assault. You don’t have to have never been in Congress to spot a pattern of criminality here.

Of course there is one charge against Trump that has not been proven, risks confrontation with a nuclear armed government, and needlessly adds a xenophobic excuse to the dozens of solid reasons that last year’s U.S. election was illegitimate. So of course this is the one everybody wants to focus on: blaming Russia for exposing the Democratic Party’s slanting of its own primary against its strongest candidate. Let’s remember that the people who have most vigorously pursued this approach are the same people who nominated possibly the only candidate who could have lost to Donald Trump.

Now we come to a charge of possible, conceivable, or an appearance of possible or conceivable obstruction of justice — and perhaps something or other at the base of the story around which justice was being sought. If we can remove Trump this way, by all means, proceed. And proceed with impeachment, not with a 2020 election campaign by some otherwise repulsive candidate who plans to win by virtue of not being Trump and somehow surviving four years of Trumpism.

But here are my concerns:

The coverup is not worse than the crime. Serious crimes are available as impeachment charges, and overlooking them effectively permits them going forward, along with any other crimes, as long as there’s no coverup.

We have yet to see any actual evidence of any actual Russian influence on the U.S. election. Toying with hostility toward a nuclear government is more reckless than anything (else) Trump has done. Can you impeach and try Trump for obstructing an investigation into what all the corporate media refer to as if it were established fact, without actually focusing on whether there is any evidence, and without demonizing Russia?

If some lesser crimes are proven that involve Russia in some way, can you try them without advancing the notion that the fundamental crime is friendship with Russians?

Can you keep in perspective the hypocrisy that all of this telegraphs to the earth? Barack Obama recorded a campaign ad for a French candidate in last week’s election, while Samantha Power was busy accusing Vladimir Putin of trying to influence the French election. The U.S. has openly sought to influence dozens of elections, including Yeltsin’s (the Trump of Russia?), not to mention overthrowing dozens of governments — still being pursued in Syria. How does this look? Wouldn’t it look better to at least add in a few articles of impeachment for the highest of crimes even if Russia isn’t involved in them?

And, yes, I mean even crimes committed by Obama and Bush and others before them. I’m not expecting consistency. While I supported impeachment for Bush and Obama as well as Trump, one cannot expect all Democrats to have gone that far in supporting the rule of law when Obama was drone master — although they may now ask Republicans to reach that higher standard of integrity. I understand that partisanship is strong poison. I just ask for at least the appearance of seriousness — even if only because going into a trial in the U.S. Senate with charges that are already proven makes a conviction far more likely.

The bigger concern, of tamping down the warmongering, of lowering the risk of nuclear conflict should be made to appeal to as many as can hear it.

Impeachment certainly should be pursued, and certainly cannot wait. But it will only establish the proper threat of impeachment for the next person to hold the office if it is done for the right reasons in the right way. The right way includes being led by the public. We, not Congress, must decide when there is a crisis.

The US Missile Attack on a Syrian Airbase: The Most Dangerous Escalation in Syria by Fazal Rahman, Ph.D.