Out now on Truthout is a 15-minute video by Sari Gelzer and Troy Page, featuring an interview with Andy Worthington, journalist and author of The Guantánamo Files, which includes excerpts from the new documentary film, “Outside the Law: Stories from Guantánamo” (directed by Polly Nash and Andy Worthington). END_OF_DOCUMENT_TOKEN_TO_BE_REPLACED

Ben Bernanke is on the Hill for reconfirmation hearings. Given the situation of the U.S. economy and the state of the dollar, should he be reappointed? Gerald Celente says no way.

END_OF_DOCUMENT_TOKEN_TO_BE_REPLACED

Misusing professional cadets at West Point as a political prop, President Barack Obama delivered his speech on the Afghanistan war forcefully but with fearful undertones. He chose to escalate this undeclared war with at least 30,000 more soldiers plus an even larger number of corporate contractors.

He chose the path the military-industrial complex wanted. The “military” planners, whatever their earlier doubts about the quagmire, once in, want to prevail. The “industrial” barons because their sales and profits rise with larger military budgets.

END_OF_DOCUMENT_TOKEN_TO_BE_REPLACED

Sen. Sanders went to the floor of the U.S. Senate to discuss why he had put a hold on the nomination of Ben Bernanke for a second term as Fed chairman.

Comcast, the nations largest cable company, announced a deal to buy NBC-Universal, one of the worlds biggest producers of TV shows and motion pictures. For consumers, it means higher prices, fewer choices and less innovation. We need to stop this merger!

more about “Say NO to Comcast/NBC Merger“, posted with vodpod

“Twenty years after the fall of the Berlin Wall, Dutch, Belgian, Italian and German pilots remain ready to engage in nuclear war.”

“Nuclear forces based in Europe and committed to NATO provide an essential political and military link between the European and the North American members of the Alliance. The Alliance will therefore maintain adequate nuclear forces in Europe.”

“Although technically owned by the U.S., nuclear bombs stored at NATO bases are designed to be delivered by planes from the host country.”

END_OF_DOCUMENT_TOKEN_TO_BE_REPLACED

Outlining his rationale for the decision to send yet more troops to Afghanistan, President Barack Obama on Tuesday began with a familiar refrain: “We did not ask for this fight. On September 11, 2001, 19 men hijacked four airplanes and used them to murder nearly 3,000 people.”

“Al Qaeda’s base of operations”, he said, “was in Afghanistan, where they were harbored by the Taliban”, who “refused to turn over Osama bin Laden”.

In fact, the Taliban offered to either try bin Laden in their court system or hand him over to a third country if the U.S. provided evidence of his involvement in the 9/11 attacks. The evidence, however, was not forthcoming, and so the Taliban did indeed refuse on that basis.

END_OF_DOCUMENT_TOKEN_TO_BE_REPLACED

Keiser Report is a no holds barred look at the shocking scandals behind the global financial headlines. From the collusion between Wall Street and Capitol Hill to the latest banking crime wave, from bogus government economic statistics to rigged stock markets, nothing escapes the eye of Max Keiser, a former stockbroker, inventor of the virtual specialist technology and co-founder of the Hollywood Stock Exchange. With the help of Keiser’s co-host, Stacy Herbert, and guests from around the world, Keiser Report tells you what is really going on in the global economy.

END_OF_DOCUMENT_TOKEN_TO_BE_REPLACED

The Time of Jacob’s Trouble

Drawing on the prophetic scriptures, Art brings to the church a framework of understanding of what it will take for present-day Jacob to become the Israel of God.

END_OF_DOCUMENT_TOKEN_TO_BE_REPLACED

Love is how we’ll need to run

Honduran coup government continues repressive tactics on election day (Report from San Pedro Sula) as the resistance vows to continue to fight for a new constitution and people’s rights.

END_OF_DOCUMENT_TOKEN_TO_BE_REPLACED 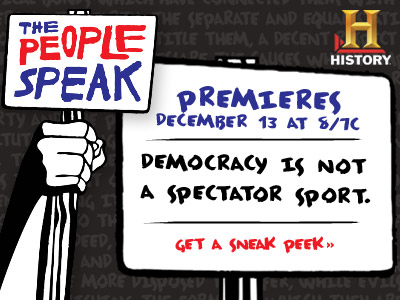 This is to inform you of the screening of the documentary THE PEOPLE SPEAK (http://www.history.com/peoplespeak), directed-produced by Chris Moore, Anthony Arnove, myself, with a great cast of readers and performers: That will be Sunday evening, Dec. 13, 8 PM (7 PM Central) on the History Channel.

END_OF_DOCUMENT_TOKEN_TO_BE_REPLACED

more about “Peace Of The Action“, posted with vodpod

Zoya: A Voice from Afghanistan: Waging war does not bring democracy