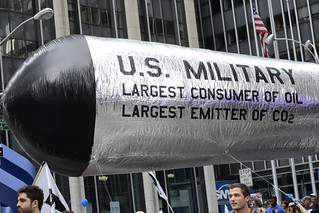 Once upon a time in the US of A, the Plundering Class told their lackeys in the White House and Congress that huge war budgets would be necessary to provide the hundreds of thousands of unquestioning, expendable bodies to act as security guards to national (corporate) “interests” (as they called them) all over the planet, because those “national interests” would regularly be extracting precious natural resources which should have belonged to the people of all those countries, instead of to corporations and Wall Street; and those extractions would be exploiting local labor at slave wages with no workers’ rights and health protections, while polluting the water, ground and air of the very workers being exploited. And, of course, those ungrateful, anti-American workers would irrationally hate the US of A and its corporations which had gone to so much trouble to give them jobs. And so those corporate “interests” would need protection. Lots of protection.

And the Plundering Class replied, “You will get your share of the mega-profits, and, when we spread the war budget contracts to every Congressional district, and you support them, you will get campaign bonanzas from the contractors and sub-contractors. It’s a win-win for everyone!”

So the D.C. lackeys of the Plundering Class cheerfully supported bigger war budgets and more US bases in foreign countries and more US Navy fleets armed with nuclear weapons and more Air Force bombers and more CIA drones and more trade agreements to exploit foreign workers at slave wages and slavery working conditions. And the bonus was that US unions, which somehow, greedily always wanted higher wages to keep up with rising costs of living, and better benefits for workers’ physical and psychological health, and better working conditions so union members wouldn’t get deathly ill or killed from their jobs, and more say in how union members were misused by the corporations, got shafted, as jobs left the US, causing wages to plummet, corporate profits to skyrocket, and union memberships to dwindle as unions got weaker than ever. Another win-win!

But soon, those ungrateful US workers, seeing their wages and incomes slide as costs increased, began to grumble. At the same time, the Plundering Class noticed that their huge profits weren’t high enough, and much of the military equipment and weapons which had boosted their bottom lines into the stratosphere were, though still in fine condition, being made surplus because the War Industry had to keep coming up with new War Toys to get bigger government contracts, and the old toys were just sitting in fields and warehouses, ever so lonely for use. How could those fine old toys still be turned into profits and the grumbling by the ungrateful workers be stopped?

That’s when the idea came: provide those surplus War Toys to local police departments so they could feel even more macho, strut around in killer uniforms, and ride in killer vehicles clutching mega-killing weapons, and declare that they needed these War Toys in their never-ending Wars on Drugs, Terrorism, and Minorities Who Thought They Were Equal to White Men. Servicing, fueling and repairing those surplus War Toys alone would provide profits, and those grumbling victims, er, citizens would be sufficiently intimidated that they wouldn’t dare try to organize! Another win-win!

So the program of giving surplus War Toys to local police departments was begun and SWAT teams and militarized local police began to use all those wonderful toys provided by the Plundering Class via its one-stop shopping mega-market, the Federal Guvmint. This program became so popular (with police) and so fabulously profitable (for war-profiteers) that now, 40% of the military equipment given to local police is brand new!

And so houses were raided and doors smashed in, for suspicion of drug possession and other freedom-threatening alleged crimes, even without solid evidence, and neighborhoods (mostly minority or poor) were terrorized, and all seemed well for the Plundering Class and its new Praetorian Guard, the militarized local police. But then, a new problem arose, just begging for a solution: what to do with all those “criminals” who survived SWAT and militarized police terrorism, but were still guilty, just because?

So yet another profitable industry arose to meet this new, insatiable demand: the Private Prison Corporations. Pretty soon, with prodding by the Plundering Class and funding somehow extracted (subsidies? tax breaks?) from the D.C lackeys, the Prison-Industrial-Congressional Complex arose, nearly (but never quite) rivaling the Military-Industrial-Congressional Complex. So the jails and prisons were soon overflowing, with more needed to be built, and more lawyers and judges needed to try cases, with more guards and wardens needing to be hired, and the US became the number one nation on earth in both the number and percentage of incarcerated people. And a hugely disproportionate number of them were African-American and Hispanic (mostly males, in both cases). We’re Number One! Yet another win-win for the mostly white, male Plundering Class!

But then, with the 9/11 attacks providing just the right climate of fear and paranoia, carefully nurtured by the Plundering Class’ D.C. lackeys and the Plundering Class’ ever-so-obliging Ministry of Corporate and Government Propaganda, still stubbornly, quaintly calling itself the corporate media, a new need was created to work with the Police/Prison State: the Total Surveillance State.

But the NSA, FBI, DIA, Home land Security Fusion Centers, and all those other “intelligence” agencies (17 in all) needed help if everyone was to be spied on and tracked and recorded 24/7, 365. So the help of Wall Street banks and giant Internet corporations was enlisted to make sure every citizen was always seen and heard and recorded, anywhere and everywhere. And, once again, it was a win-win for the Total Surveillance State and its Plundering Class Masters as taxpayer funds flowed freely to the 17 Guvmint “intelligence” agencies as well as the Internet corporations where people shopped and searched to spy on and violate the Fourth Amendment rights of those very taxpayers. But, just to be fair, all foreigners were also spied on, including heads of foreign states. Now, that’s really democracy in action!

However, soon some ungrateful citizens began to complain about all these wonderful advances by the Total Surveillance/Police State while so many millions found it impossible to get jobs and afford to live. These ungrateful, grumbling citizens started a movement they called “Occupy” and had the unmitigated gall to accuse what they called “the 1%” of fixing and presiding over a society which is extremely unequal. So the Plundering Class had no choice but to put those ingrates in their place by using the Total Surveillance State and the militarized police these same grumbling citizens had so generously paid for to crush this insolent movement shortly after its appearance in many US cities. How dare these 21st century hippies defy Wall Street and the corporations, which make life so worth living, by ungratefully living in tents in public parks and sharing food and ideas! That threat to civilized society just had to be nipped in the bud. So the Obama “Justice” Department worked with the FBI, Homeland Security, local militarized police, and Wall Street banks to violently crush the Occupy rascals, beating and pepper-spraying and arresting them for having the audacity to sleep in public parks and speak out against inequality.

And, whenever poor, mostly African-American males dared to talk back to the domestic, uniformed, mostly white guardians of the Plundering Class and its corporate interests, or foolishly insisted on their independence and integrity as human beings who refused to be subservient to their betters, they were also put in their lower place, even if it meant choking or beating or shooting them. Order (for the Plundering Class) must be preserved or restored at all costs. Besides, what good is having all those military surplus weapons if they are not used? So order was restored and those expensive toys were used and justified their costs. One more win-win for the Plundering Class!

But then, just when all seemed to be going extremely well for the Plundering Class and its loyal servants in D.C., grumbling citizens again had the audacity to march, 400,000 of them, for ending catastrophic climate disaster. How can endless growth leading to endless profits be continued if corporations stop drilling and exploiting and ravaging and pillaging and polluting without accountability? How can capitalism itself continue if these radical, hippy environmentalists have their way and begin to change pro-corporate, pro-fossil fuel government policies? So the Plundering Class let these clueless radicals have their New York City march, far from the United Nations and barely reported on by corporate media, then the U.N. Summit on Climate Change, supported and infiltrated by the biggest and best greenhouse gas-emitting corporations on earth, was allowed to proceed days after the Climate March, and many speeches containing much wonderful rhetoric were delivered, including by the U.S. President who supported fracking and exporting coal and drilling offshore and in the Arctic and who had yet to decide about the XL tar sands pipeline, and every one of the U.N. diplomats smiled and then went home to continue business as usual. Yet another win-win for the Plundering Class!

Then, to keep the public’s mind off catastrophic climate disaster, the President announced yet another war in the Middle East, this time against terrorists called ISIS and also a group no one had heard of, Khorasan, and everyone was told to be afraid, be very afraid, because ISIS was brutally beheading people and video-ing the beheadings, unlike the beheadings which regularly take place in the public squares of Saudi Arabia, the U.S. ally and oiligarchist dictatorship which prevents women from driving or having most other rights. And the President gathered together a coalition of Middle Eastern and European Plundering Class allies to bomb ISIS and Khorasan in both Iraq and Syria, to promote peace and democracy there, and make sure the oil and natural gas there would be kept under the control of the Plundering Class. And the corporate, war-loving pundits approved, as did the war-lovers in Congress (though some wanted even more bombing and U.S. troops on the ground, because you can never have enough endless quagmires), and the war-profiteering corporations lustily applauded, for more endless riches to come! And the stock market went up and up! It was, once again, a win-win for the Plundering Class worldwide!

And soon, November elections, the wonderful biennial carnival celebrating the appearance of democracy in the good old US of A, will be held, so the corporate media will be oh so busy telling us engaging tales of candidates’ quirks and fashions, scandals and gaffes, showing us all the colorful campaign stops and excerpting all the wonderful-sounding speeches these corporate patriots make as they promise to remake “America” for the umpteenth time!

Conditioned Consciousness: How The .01% Gets Away With Trillions by David DeGraw + The Economics of Revolution

10 thoughts on “Once Upon a Time in the US of A: An Unfairness Tale by Ed Ciaccio”