An interview with one of the best in the business, Bonnie Faulkner (Guns and Butter).

END_OF_DOCUMENT_TOKEN_TO_BE_REPLACED

In a blatant example of “do as I say, not as I do,” the US government is profiting handsomely by accepting marijuana cash in the payment of taxes while imposing huge penalties on banks for accepting it as deposits. Onerous reporting requirements are driving small local banks to sell out to Wall Street. Congress needs to harmonize federal with state law.

END_OF_DOCUMENT_TOKEN_TO_BE_REPLACED

I’ve always been intrigued by the major questions not asked by reporters at press conferences, not asked by legislators at public hearings or even the questions citizens at town meetings don’t ask public officials. It’s not that they do not know about or could not easily become informed enough about a given issue and ask substantive questions. It’s just that so many taboos are packed into these questioners’ ideological mindset, career goals or concern with what other people over them might think. Maybe it is a culturally-rooted fear of challenging entrenched power brokers.

END_OF_DOCUMENT_TOKEN_TO_BE_REPLACED

California’s “Adult Use of Marijuana Act” (AUMA) is a voter initiative characterized as legalizing marijuana use. But critics warn that it will actually make access more difficult and expensive, squeeze home growers and small farmers out of the market, heighten criminal sanctions for violations, and open the door to patented, genetically modified (GMO) versions that must be purchased year after year.

END_OF_DOCUMENT_TOKEN_TO_BE_REPLACED 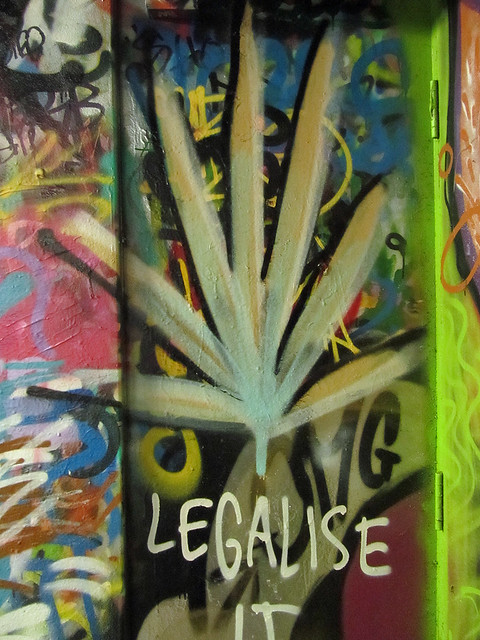 The war on cannabis that began in the 1930s seems to be coming to an end. Research shows that this natural plant, rather than posing a deadly danger to health, has a wide range of therapeutic benefits. But skeptics question the sudden push for legalization, which is largely funded by wealthy investors linked to Big Ag and Big Pharma.

END_OF_DOCUMENT_TOKEN_TO_BE_REPLACED

Congressman Ron Paul introduced H.R. 1831, the “Industrial Hemp Farming Act of 2011” on May 11th of this year. It is a simple bill at just two pages in length, and it would legalize the growing of industrial hemp in the United States.

Currently farmers can grow industrial hemp only if they have received a permit from the DEA – a prospect that the agency has made all but impossible for decades. Otherwise, it is illegal to grow.

END_OF_DOCUMENT_TOKEN_TO_BE_REPLACED

How did hemp go from being a popular industrial material to a banned substance in 1937? Author Joe Bageant describes how the non-psychoactive plant was once used in everything from paper to automobiles, until a targeted PR campaign forever tied hemp’s image to it’s cousin, marijuana.

Joe Bageant is a renowned commentator on the politics of class in the US. His previous novel, Deer Hunting with Jesus, has been been turned into a play and an upcoming tv series. His regular online columns have made him a cult hero among political progressives and gonzo-journalism junkies. Bageant’s latest book Rainbow Pie: A Redneck Memoir is a coming-of-age story set in post-World War II America in the small white tribes of West Virginia, where a massive social and economic shift from agrarian to urbanization has meant the heavy loss of meaningful work and community. Representing the ‘hillbilly’ class as a minority, Bageant laments ‘the piece of the rainbow pie’ promised to the working class of his forefathers, which never materialized. He praises the ‘white trash’ trucker heroes, who stood up to the corporate oppressors by unionizing, helping to form a middle class, and finally affording an education for their children.

END_OF_DOCUMENT_TOKEN_TO_BE_REPLACED

“…the continuous consolidation of money and power into higher, tighter and righter hands.”

That was GHW Bush’s answer to reporter Sarah McClendon’s question in 1992 regarding what Iran-Contra was all about. He also told her that, “If the American people really knew what we had done, we would be chased down the streets and lynched.”

END_OF_DOCUMENT_TOKEN_TO_BE_REPLACED

Economic recovery in review. The Dow’s up, but why are Main Street Americans still reeling from last year’s economic collapse? With Americans still facing rising unemployment, foreclosures, and declining property values, renowned economist James K. Galbraith on whether we’ve averted another crisis and how to get help for the middle class.

END_OF_DOCUMENT_TOKEN_TO_BE_REPLACED

Miguel Tinker Salas: Collapse of traditional economy created the space for the cartels to grow.

END_OF_DOCUMENT_TOKEN_TO_BE_REPLACED

Poll: Should Drugs Be Legal?

A criminally stupid war on drugs in the US By Clive Crook (updated: added video and poll)

Here are 2 polls you can participate in.  Vote directly in the poll box below then go to the link to vote in CNN’s poll. ~ DS

Do you think the United States should legalize drugs?

This is not a scientific poll

A criminally stupid war on drugs in the US By Clive Crook (updated: added video and poll)

How much misery can a policy cause before it is acknowledged as a failure and reversed? The US “war on drugs” suggests there is no upper limit. The country’s implacable blend of prohibition and punitive criminal justice is wrong-headed in every way: immoral in principle, since it prosecutes victimless crimes, and in practice a disaster of remarkable proportions. Yet for a US politician to suggest wholesale reform of this brainless regime is still seen as an act of reckless self-harm.

Even a casual observer can see that much of the damage done in the US by illegal drugs is a result of the fact that they are illegal, not the fact that they are drugs. Vastly more lives are blighted by the brutality of prohibition, and by the enormous criminal networks it has created, than by the substances themselves. This is true of cocaine and heroin as well as of soft drugs such as marijuana. But the assault on consumption of marijuana sets the standard for the policy’s stupidity.

via A criminally stupid war on drugs in the US

more about “LEGALIZE ALL DRUGS!“, posted with vodpod

Do you think the United States should legalize drugs?

This is not a scientific poll

Poll: Should Drugs Be Legal?

Update: added a link to a  story; see below

more about “One Medical Marijuana Provider In CA …“, posted with vodpod

Would Marijuana Light Up the Economy?

The debate about whether to legalize marijuana in the United States has never been a mainstream one. So it’s been fascinating to watch how much attention the concept has gotten lately, however viable it may or may not be.

Preoccupation with the violent drug war is one factor; marijuana is the largest source of revenue for the Mexican cartels’ multibillion dollar business north of the border. Commodify the major cash crop through legalization, the idea goes, and its cost will plummet, putting a serious dent in the bad guys’ bank accounts.

via Would Marijuana Light Up the Economy? | Mother Jones.

Jackie and Dunlap’s solution to the Mexican drug wars. Well, Dunlap’s, at least.

more about “Legalize Drugs, Save Mexico“, posted with vodpod