In recent years, the US and NATO have been militarizing the Arctic through Norway as a means to confront Russia. This militarization is increasing tensions between nuclear-armed nations. As the Arctic melts away, these powerful nations are competing for dominance in the region as new routes are established, building new military bases, constructing new radars, and less efforts are placed in diplomacy.

END_OF_DOCUMENT_TOKEN_TO_BE_REPLACED

How to best describe the behavior and attitude of the United States in foreign relations? There are several villainous genres that could apply. A mafia don who runs protection rackets is one of them. So too is the psycho boyfriend who throws a fit of rage over any perceived sign of disloyalty.

END_OF_DOCUMENT_TOKEN_TO_BE_REPLACED

NATO will hold war games in Norway’s Arctic Circle in March, where it will be supporting climate change-induced resource extraction and increasing the military tension with Russia.

END_OF_DOCUMENT_TOKEN_TO_BE_REPLACED 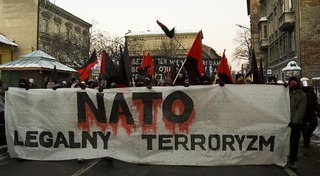 Rick Rozoff is the manager of Stop NATO. He discusses the Ukrainian crisis and the state of NATO at age 65.

END_OF_DOCUMENT_TOKEN_TO_BE_REPLACED

Norway’s cold-blooded mass killer Anders Behring Breivik claimed in a closed court hearing that he was a member of two cells in a far-right organisation committed to bringing about a cultural revolution in Europe.

The claim by the 32-year-old son of a diplomat implies that he had accomplices in carrying out his deadly mission in which at least 76 people were killed in a twin bomb and gun attack in and around the Norwegian capital, Oslo, last Friday.

END_OF_DOCUMENT_TOKEN_TO_BE_REPLACED

Within hours of Norway’s deadly bomb and gun attacks claiming at least 91 victims it has become clear that the horror was perpetrated by a Norwegian loner with rightwing Christian fundamentalist affiliations.

Yet President Barack Obama reacted immediately to the news of the atrocity to insinuate an Islamic connection and to justify America’s war on terror.

END_OF_DOCUMENT_TOKEN_TO_BE_REPLACED

US diplomatic cables quoted by the Norwegian daily newspaper Aftenposten expose discussions between US legislators and Israeli officials on preparations for the next Middle East war.

These documents make clear both Israel’s preparations for another major war in the region and the full support of visiting members of the US Congress, Democratic and Republican, who apparently subordinated themselves to the secrecy demands of the Israeli state.

END_OF_DOCUMENT_TOKEN_TO_BE_REPLACED

Since the beginning of the year the United States and NATO have repeatedly indicated in both word and deed their intention to lay claim to and extend their military presence in what they refer to as the High North: The Arctic Circle and the waters connecting with it, the Barents and the Norwegian Seas, as well as the Baltic.

Washington issued National Security Presidential Directive 66 on January 12, 2009 which includes the bellicose claim that “The United States has broad and fundamental national security interests in the Arctic region [which] include such matters as missile defense and early warning; deployment of sea and air systems for strategic sealift, strategic deterrence, maritime presence, and maritime security operations.” [1] Later in the same month the North Atlantic Treaty Organization [NATO] held a two-day Seminar on Security Prospects in the High North in the capital of Iceland attended by the bloc’s secretary general and its top military commanders.

This coordinated initiative has been covered in a previous article in this series [2] and plans by the West to encroach on Arctic territory and confront Russia in the western region of the ocean have been addressed in another. [3]

END_OF_DOCUMENT_TOKEN_TO_BE_REPLACED

Some of Norway’s most notorious criminals are doing time in the world’s first eco-prison. The focus is on an environmentally friendly jail sentence. It’s aimed at easing the transition for prisoners about to be set free. Al Jazeera’s Nick Clark reports on an experiment which is producing positive results.

END_OF_DOCUMENT_TOKEN_TO_BE_REPLACED

After months of preparation by staff of the Genetic Resources Center (GRC) at the International Rice Research Institute (IRRI; http://www.irri.org ), led by its head Dr. Ruaraidh Sackville Hamilton, a replicate set of the Global Rice Collection from 123 countries held by IRRI left on 21 January for the Svalbard Global Seed Vault or Doomsday Vault. See http://www.croptrust.org/main/arctic…. for more information on the global effort. END_OF_DOCUMENT_TOKEN_TO_BE_REPLACED

liveleak.com — This is a video clip teaser from the bonus material on the DVD-version of Michael Moore’s movie “Sicko” This clip was left out of the original movie because it was said to be “unbelievable” and “people wouldn’t believe it” because it was too good to be true.

via The World’s Best Country to live in – Left out of the Michael Moore film SICKO watch!