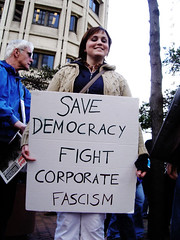 For those who are interested in the real world, a look at the actual history suggests some adjustment — a modification of free market theory, to what we might call “really existing free market theory.” That is, the one that’s actually applied, not talked about.

And the principle of really existing free market theory is: free markets are fine for you, but not for me. That’s, again, near a universal. So you — whoever you may be — you have to learn responsibility, and be subjected to market discipline, it’s good for your character, it’s tough love, and so on, and so forth. But me, I need the nanny State, to protect me from market discipline, so that I’ll be able to rant and rave about the marvels of the free market, while I’m getting properly subsidized and defended by everyone else, through the nanny State. And also, this has to be risk-free. So I’m perfectly willing to make profits, but I don’t want to take risks. If anything goes wrong, you bail me out.

END_OF_DOCUMENT_TOKEN_TO_BE_REPLACED

“There’s only one party in America today, with two wings, the conservative wing, known as Democrats, and the reactionary wing, known as Republicans.” — Gore Vidal

“If you ever hear the term “Think Tank”, run from the room. Assume A) no one is thinking and B) a tank is coming your direction.” — John Nichols

END_OF_DOCUMENT_TOKEN_TO_BE_REPLACED

July 3 would have been my parents’ 67th Anniversary. 67 years. Maybe it was the triumph of Hope over Reality (still have that Obama 2008 poster?). Or maybe something else, something that those of us who haven’t walked that far down the path can’t imagine.

END_OF_DOCUMENT_TOKEN_TO_BE_REPLACED

Today, the Syrian Arab News Agency published an article that contained a number of mistranslations and mischaracterized statements that I made during a news conference in Damascus.

END_OF_DOCUMENT_TOKEN_TO_BE_REPLACED

Summary: The current wars under the banner of the war on terror have all been justified under the notion of a humanitarian war.

END_OF_DOCUMENT_TOKEN_TO_BE_REPLACED

Capitalism and Other Kids’ Stuff presents the case of why capitalism is not the end of the line on the evolution of social structers using easily verifiable observations and facts. … Read More

Let us imagine for a moment that you live in a country that has tremendous poverty combined with a great polarity between ‘haves and have nots ‘. In this country there are no laws to protect girls from being sold for money by their parents. Thus, poor parents decide to sell their daughters, even as young as 11 or 12, to be made into prostitutes or concubines. END_OF_DOCUMENT_TOKEN_TO_BE_REPLACED

Van Jones is calling all people of conscience who care about America to get involved, stand up and help rebuild the American Dream.

Thursday evening I attended the “Rebuild the Dream” event in New York City hosted by Van Jones, featuring the musical group ROOTS with Shepard Fairey DJing.  Honestly I went to hear Jones but also to see Fairey whose “Make Art Not War” poster hangs in my living room.

END_OF_DOCUMENT_TOKEN_TO_BE_REPLACED

“I’ve had grown men wet this floor with tears, begging for a job. We have to pray with some to keep them from killing themselves. So many say they just want to die,” says Charlie Tarrance, a director of a private social agency. His task is to deal with growing lines of despairing people looking for jobs, housing, and food. The place is Gadsden, Alabama, but it could be anywhere in the United States.

END_OF_DOCUMENT_TOKEN_TO_BE_REPLACED

As the debate over deficits ramped up in Washington on Monday, Sen. Bernie Sanders laid out the compelling case not to slash programs for working families. Any deficit reduction package must rely on new revenue for at least half the reduction in red ink, he added in a major address in the Senate. Sanders spoke at length about what caused deficits (wars, Wall Street bailouts, tax breaks for the rich) and how to shrink them (more revenue from the wealthiest Americans to match spending cuts). He urged fellow senators not to yield to Republican congressional leaders who “acted like schoolyard bullies” when they walked out of budget negotiations. He summed up the situation in a letter to the president that had been signed by more than 16,000 people by the time he completed his speech.

END_OF_DOCUMENT_TOKEN_TO_BE_REPLACED

From The Heritage Foundation, a Conservative Think-Tank:

“Abstract: Since 2000 about 95 percent of U.N. member states that receive U.S. assistance have voted against the United States most of the time in the U.N. General Assembly on non-consensus votes. The U.S. should inform aid recipients that their support–or lack of support–for U.S. priorities in the U.N. and other international organizations will directly affect future decisions on allocating U.S. assistance. In order to strengthen and broaden support for America’s policies in the U.N., the U.S. should also seek to build coalitions of like-minded nations that are firmly committed to political and economic freedom. Over the long term, U.S. aid could facilitate the expansion of these coalitions by encouraging more countries to become freer, both politically and economically”.

END_OF_DOCUMENT_TOKEN_TO_BE_REPLACED

Voters Evolt! promotes a Peaceful Political Evolution consisting of a national voting holiday and a uniform paper ballot which asks questions on a National Policy Referendum and provides for a Write-in Vote for President.