Sixteen of the world’s largest banks have been caught colluding to rig global interest rates. Why are we doing business with a corrupt global banking cartel?

United States Attorney General Eric Holder has declared that the too-big-to-fail Wall Street banks are too big to prosecute. But an outraged California jury might have different ideas. As noted in the California legal newspaper The Daily Journal: END_OF_DOCUMENT_TOKEN_TO_BE_REPLACED

[Please scroll down to find the Action Alerts and sign them.] 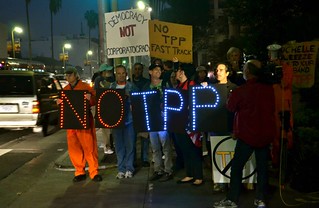 Image by Mike Chickey via Stop FastTrack via Flickr

The U.S. military wants it, and so does Corporate America–which is why we should beware

BARACK OBAMA is headed to Asia for a four-country tour designed to revive diplomatic and economic attention on the region that Washington’s imperial strategists believe is crucial to the future.

Obama will travel to Japan, South Korea, Malaysia and the Philippines, the U.S. government’s main allies in the region. But looming over each stop and every meeting will be a country that definitely isn’t on the presidential itinerary: China. END_OF_DOCUMENT_TOKEN_TO_BE_REPLACED

US President Barack Obama kicks off his East Asia tour this week with a threat of military aggression towards China at the same time that vice president Joe Biden was stepping up similar provocations to Russia over the Ukraine crisis.

That is because the so-called American “pivot to Asia” is intimately connected with the crisis in Ukraine and the increasing tensions between Washington and Moscow. Both cases are the result of US imperialist aggression aimed at postponing the collapse of American global hegemony. Although in the laughable way that the Western corporate media invert reality Washington’s vice is turned into a virtue. END_OF_DOCUMENT_TOKEN_TO_BE_REPLACED

“We gather tonight knowing that this generation of heroes has made the United States safer and more respected round the world.” (President Barack Obama, State of the Union address, 24th January 2012)

As Easter was celebrated in the US and UK with, for believers, the message of hope, Fallujah, the region and much of the country is again under siege, not this time by US mass murderers, but by the US proxy government’s militias armed with US delivered weapons. END_OF_DOCUMENT_TOKEN_TO_BE_REPLACED