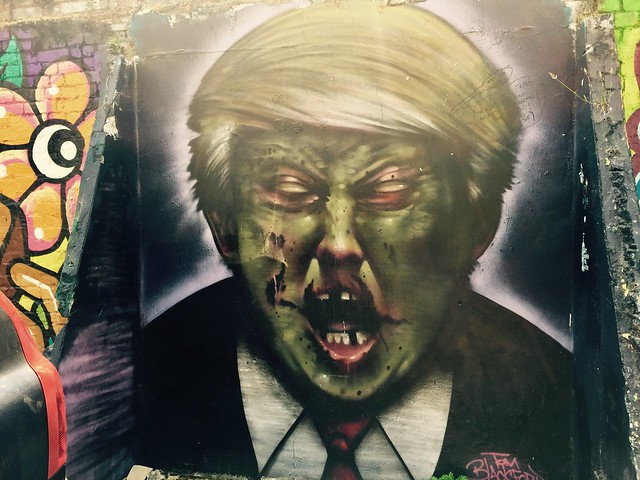 The answer to all these questions is yes. But so what? There is no evidence, only supposition, that Russia’s stabs made any real difference in the election’s outcome. Whatever impact Russia had was negligible compared to the longstanding and ongoing interference of the United States’ homegrown corporate and financial oligarchy in America’s supposedly democratic elections. The depressing, demobilizing, and corporate-imperial Hillary Clinton campaign and the dismal neoliberal record of the Wall Street-captive Barack Obama presidency were by far and away the leading factors behind Trump’s terrible victory.

Wealthy U.S. election investors and lobbyists kept Hillary’s miserable campaign pathetically centrist and dull – a deadly problem in an anti-establishment election. A hard-right wing of the nation’s financial plutocracy contributed significantly to the reactionary-populist Trump’s surge after the 2016 Republican National Convention. The corporate operatives atop the Democratic Party fixed the primary contest against the progressive-populist Bernie Sanders, who ran in accord with majority-progressive opinion and would have beaten Trump.

Russia’s “interference” in the 2016 US election was nothing compared to the United States’ regular and ongoing intervention in other nations’ politics, including their elections. Israeli intervention in U.S. politics “vastly overwhelms” anything Russia has done, as Noam Chomsky observed last year.

The laughable charge that Russia electorally installed a vicious and corrupt gangster atop the US government in 2016 is one of history’s greatest example of the pot calling the kettle black. Washington intervened powerfully to ensconce the despicable drunken oligarch Boris Yeltsin in the Kremlin in Russia’s 1996 presidential election.

Why have the Clinton-Obama-Schumer-Pelosi-MSNBC-CNN-Washington Post–New York Times-CIA-FBI Democrats run so hard with the unprovable Russia-Trump collusion narrative over the last two years? One goal was to keep the fires burning on their cherished NATO-expansionist “new” Cold War with Russia. Accusing Moscow of having turned the election and placed their “asset” Trump in the White House was a way both to stoke hatred of Russia and to compel the new president to continue Washington’s aggressive posture towards Moscow.

Another intention was about domestic politics. Saying that “Russia did it” was a “dog ate our homework” excuse for the dismal, dollar-drenched corporate Democrats’ failure to mobilize their party’s popular base against Trump in 2016. At the same time, saying that Trump colluded with Russia was a way of delegitimizing his presidency by tarring him as a traitor.

Russiagate also provided a way for the corporate Democrats to pretend to be mounting a serious popular “Resistance” to Trump, Trumpism, the Republicans, and the nation’s ongoing drift into creeping fascist corporate totalitarianism. The establishment Democrats represent no such peoples’ opposition. They are willing partners in the making of U.S.-American “neoliberal fascism.” It is their job to set and police the fatally narrow, not-so leftmost parameters of acceptable political and policy debate. Their role in the American corporate state is (among other things) to contain, confine, and coopt serious grassroots movements against the nation’s unelected and interrelated dictatorships of wealth and empire.

Russiagate has been a critical tool in their service to the nation’s capitalist and imperial masters. Every hour of CNN and MSDNC broadcast time given to Moscow-mad Rachel Maddow’s collusion and conspiracy cargo cult has been an hour of widely viewed political news and commentary spent avoiding numerous bigger problems around which the aspiring fascist leader Trump has behaved in profoundly dangerous ways: sexism, racism, nativism, gun-violence, voter suppression, white-nationalist terrorism, classism, plutocracy, civil rights violations, civil liberties rollbacks, militarism, hyper-masculinism, and, last but not least – the biggest issue of our or any time – the unfolding capitalogenic climate catastrophe. Trump has been making all these things worse, with no small help from the Inauthentic Opposition party (as Sheldon Wolin usefully labeled the Democrats in 2008).

No less of a Putin- and Trump-critic than the Russian dissident Masha Gessen tried without success to warn the U.S. liberal establishment off the “Russia Conspiracy Trap” in the spring of 2017. Russiagate, Gessen prophesied, “will not bring down Trump. He may sacrifice more of his people, as he sacrificed Flynn, as further leaks discredit them. Various investigations may drag on for months, drowning out other, far more urgent issues.”

Other, far more urgent issues like capitalism’s war on livable ecology, which now raises the real specter of human extinction, with the American-as-Apple-Pie eco-fascist Donald Trump and the United States in the vanguard of the effort to turn the planet into a giant Greenhouse Gas Chamber.

Gessen has been born out in spades.

But it’s worse than just diversion. By putting all their eggs into the legally and political non-viable Russia collusion basket, the dismal Dems not only diverted public discussion and attention from the issues that matter most. They also created a deadly exoneration moment for a creeping fascist president they can’t or won’t oppose on authentically democratic and popular grounds. Watch the orange monstrosity’s approval numbers climb in the wake of the March 2019 Mueller Absolution. As Jonathan Cook wrote on CounterPunch last weekend:

“Russiagate has been two years of wasted energy by the left, energy that could have been spent both targeting Trump for what he is really doing rather than what it is imagined he has done, and targeting the Democratic leadership for its own, equally corrupt practices… But it’s far worse than that. It is not just that the left wasted two years of political energy on Russiagate. At the same time, they empowered Trump, breathing life into his phony arguments that he is the anti-establishment president, a people’s president the elites are determined to destroy.” (emphasis added)

There are so many good and important reasons to loathe Trump and to fight against him and the ever more fascistic, climate change-denying Republican Party. Russiagate has focused public attention on the president’s dreamed-of sins rather than his actual crimes. It now threatens to politically strengthen him in the deadly execution of his many creeping-fascist and eco-cidal transgressions.

Gerald Horne and Jeff Cohen join host Paul Jay to unpack the Democrat and corporate media obsession with Russiagate, the foreign policy implications, and how it let Trump off the hook on major policy issues.